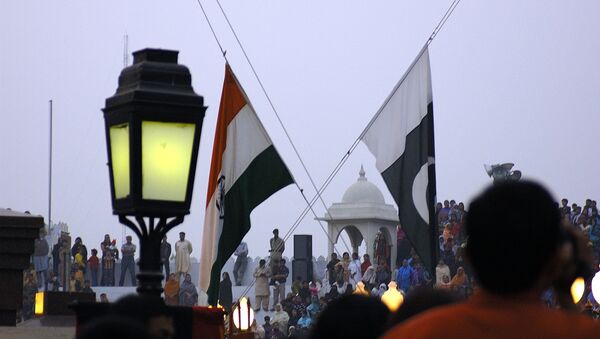 Shweta Sharma
Sputnik correspondent
All materialsWrite to the author
For decades, the two South Asian rivals, India and Pakistan, have been squabbling over Jammu and Kashmir, which both countries claim in full, but control in part. Islamabad launched a diplomatic "war" against New Delhi after the latter abrogated the semi-autonomous status of Jammu and Kashmir in August 2019 and fully integrated it with India.

India has hit out at Pakistan for raising the Kashmir issue during a high-level meeting at the UN to mark the 75th anniversary of the organisation, claiming that Islamabad is globally recognised as an epicentre of terrorism and admits to harbouring terrorists.

India's First Secretary Vidisha Maitra Vidisha Maitra exercised India's Right of Reply and scorned Pakistan's Foreign Minister Shah Mahmood Qureshi, saying that if there is an “unfinished agenda” at the UN, it is that of tackling the scourge of terrorism.

"Pakistan is a country which is [a] globally recognised epicentre of terrorism, which by its own admission harbours and trains terrorists and hails them as martyrs, and consistently persecutes its ethnic and religious minorities", Maitra said.

Maitra also slammed Pakistan for using the event marking the 75th anniversary of the UN for its own agenda, "Our delegation had hoped that during this solemn commemoration of a shared global milestone, the General Assembly would be spared another repetition of the baseless falsehoods that have now become a trademark of Pakistan’s interventions on such platforms".

Bringing up the Jammu and Kashmir matter at the UN, Pakistan’s Qureshi compared Jammu and Kashmir to the Palestinian issue, saying they are the UN’s “most glaring and long-standing disputes” and the people in Kashmir are awaiting the UN’s efforts to give them their “right to self-determination”.

India called it a “never-ending fabricated narrative” by Pakistan and reiterated that Kashmir is an integral part of India.

India and Pakistan claim the entirety of Jammu and Kashmir as their territory, but govern the region only in parts. Since gaining independence from British rule in 1947, both countries have been at odds over the disputed territory and have fought two wars over Kashmir.

The rivalry between the nuclear-armed neighbours worsened in 2019, when New Delhi abrogated Article 370 of its Constitution and revoked the special status enjoyed by the erstwhile state of Jammu and Kashmir. The state was also split into two federally administered territories. In response, Islamabad suspended diplomatic, trade and communication ties with New Delhi, and has since been trying to bring attention to the dispute on numerous international platforms.