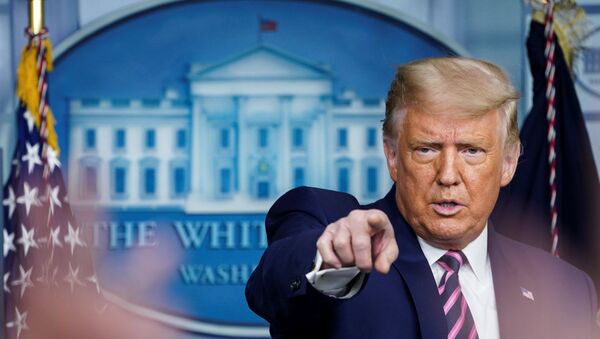 © REUTERS / KEVIN LAMARQUE
Subscribe
Max Gorbachev
All materialsWrite to the author
The Speaker of the House of Representatives, an ardent critic of the president, was one of the key figures behind the impeachment inquiry into Trump, which ended with his acquittal.

US President Donald Trump dared the Speaker of the House of Representatives Nancy Pelosi to impeach him a second time for attempts to nominate a replacement for Ruth Bader Ginsburg, the US Supreme Court Justice who died last week.

"I'm the only guy in the world that could be impeached for filling a seat. Go ahead, I want them to do that," Trump told his supporters at a rally in Toledo Ohio, adding that he "constitutionally obligated" to nominate a new justice.

His statement comes a day after Pelosi did not rule out impeaching Trump or Attorney General William Barr if the Senate push through Trump’s nominee during a lame duck session.

Trump wants to replace Ruth Bader Ginsburg, a liberal who was appointed by then-President Bill Clinton in 1993, with a conservative. He said his pick would be a woman and that he would announce her name on Friday or Saturday. Once the president names a nominee, the Senate, which is now dominated by Republicans, will hold a vote.

Senate majority leader Mitch McConnell signalled that the vote will be held before upcoming presidential elections, scheduled for November. Democrats oppose the move. They accuse McConnell of hypocrisy, reminding him that when justice Anton Scalia died in 2016, McConnell refused to hold a vote to confirm the nominee put forward by Barack Obama, a Democrat.

Pelosi, the most powerful Democrat, suggested that she and her fellow party members can influence the vote on Trump’s nominee.

"We have our options. We have arrows in our quiver that I’m not about to discuss right now, but the fact is we have a big challenge in our country," Pelosi said.

Who Was Ruth Ginsburg and Why is Trump’s Nominee Important?

Ruth Bader Ginsburg died on 18 September at the age of 87 from pancreatic cancer. A graduate of Harvard Law school, she became the second female justice in the history of US Supreme Court, when she was nominated by president Bill Clinton. Ginsburg achieved near-celebrity status for defending women’s rights and progressive ideas.

As mentioned earlier, Trump wants to replace Ginsburg, a liberal, with a conservative and if his nominee is confirmed, this will cement a right-leaning majority in the Supreme Court, the country’s highest court, for decades, as justices there serve until they die or retire.

The US Supreme Court rules on the most contentious laws and disputes between states and the federal government.

According to granddaughter of Ruth Bader Ginsburg, the justice’s dying wish was not to be replaced until after the presidential election. Trump questioned the veracity of this statement.

"Well, I don’t know that she said that, or was that written out by Adam Schiff and Schumer and Pelosi? I would be more inclined to the second," Trump said.

000000
Popular comments
Thug Trump in his prime trying to pick a fight with a woman. Real POTUS material, he enjoys wallowing in gutters, a real life swamp slob.
amike
22 September 2020, 15:22 GMT
000000
RBG never said those words attributed to her, Trump is right. That woulda been the last thing on her mind as she was probably out of it anyway on various drugs and sleeping pills
chrrev
22 September 2020, 15:51 GMT
000000
Newsfeed
0
New firstOld first
loader
LIVE
Заголовок открываемого материала
Access to the chat has been blocked for violating the rules . You will be able to participate again through:∞. If you do not agree with the blocking, please use the feedback form
The discussion is closed. You can participate in the discussion within 24 hours after the publication of the article.
To participate in the discussion
log in or register
loader
Chats
Заголовок открываемого материала
Worldwide
InternationalEnglishEnglishMundoEspañolSpanish
Europe
DeutschlandDeutschGermanFranceFrançaisFrenchΕλλάδαΕλληνικάGreekItaliaItalianoItalianČeská republikaČeštinaCzechPolskaPolskiPolishСрбиjаСрпскиSerbianLatvijaLatviešuLatvianLietuvaLietuviųLithuanianMoldovaMoldoveneascăMoldavianБеларусьБеларускiBelarusian
Transcaucasia
ԱրմենիաՀայերենArmenianАҧсныАҧсышәалаAbkhazХуссар ИрыстонИронауОssetianსაქართველოქართულიGeorgianAzərbaycanАzərbaycancaAzerbaijani
Middle East
Sputnik عربيArabicArabicTürkiyeTürkçeTurkishSputnik ایرانPersianPersianSputnik افغانستانDariDari
Central Asia
ҚазақстанҚазақ тіліKazakhКыргызстанКыргызчаKyrgyzOʻzbekistonЎзбекчаUzbekТоҷикистонТоҷикӣTajik
East & Southeast Asia
Việt NamTiếng ViệtVietnamese日本日本語Japanese中国中文Chinese
South America
BrasilPortuguêsPortuguese
NewsfeedBreaking
11:24 GMTNorth Korean Website Slams 'Squid Game' as Showing 'Hell-Like Horror Where Only Money Matters'
11:07 GMTDeath Toll From Kandahar Mosque Bombing Rises to 63
11:02 GMTFrench Politician: US Has Moral and Legal Obligation to Unblock Afghan Assets & Let the Nation Be
10:59 GMT‘Killed Serving the People’: UK Media Shows Rare Display of Cross-Party Unity in Tribute to Dead MP
10:50 GMTIs Russia in Danger of Running Out of Gold Deposits?
09:08 GMTUS-Greek Bases Pact Signals Bid to Pressure Turkey, Dominate East Mediterranean
09:02 GMTAustrians Invited to Presidential Palace for COVID-19 Shots
09:00 GMTNASA's Lucy Mission Blasts Off to Examine Trojan Asteroids
09:00 GMTPremier League: Five Biggest Games of Matchweek Eight
08:55 GMTUK Police Ordered to Immediately Review MPs' Security Arrangements After Fatal David Amess Stabbing
08:30 GMTSeveral Dead and Dozens Injured: What Was Behind Thursday's Bloody Events in Lebanon?
07:33 GMTISS Crew Was Woken Up by Siren at Night
07:16 GMTAnother Day, Another Blunder: Psaki to ‘Choose Words More Carefully’ After Ethics Watchdog Complaint
07:12 GMTNetflix Fires Organiser of Trans Employee Walkout for Leaking Internal Documents, Reports Say
06:08 GMTFour Indian Paramilitary Personnel Injured in Blast at Raipur Railway Station
05:59 GMTBiden Admits He Will Have to 'Build Back Better' With Less, Is ‘Not Going to Get $3.5 Trillion’
05:45 GMT‘Sensational’ Remains Buried by Ancient Vesuvius Eruption Discovered at Herculaneum
04:34 GMTJapan Prime Minister Wants to Include Possible Attack on Enemy Bases in Security Strategy
04:31 GMTMagnitude 5.5 Earthquake Registered Near Southern Kuril Islands, Seismologists Report
04:30 GMTWatch Shark Biting Alligator as It Floats Near Dock Enjoying Sunny Day