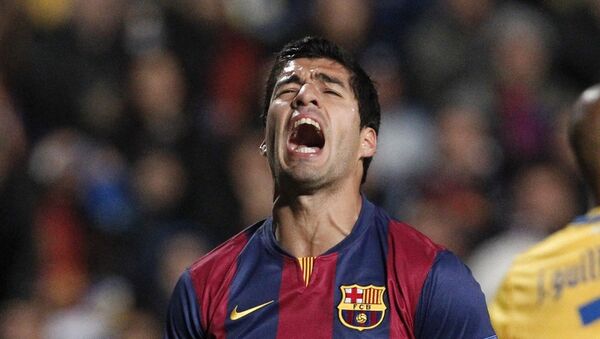 Max Gorbachev
All materialsWrite to the author
After Ronald Koeman was appointed the new manager of Barcelona, the Uruguayan striker was reportedly told he would no longer play a central role in Barca and was free to leave. He has been linked to Juventus, but now reports say that the striker may continue playing in La Liga.

Italian police have reportedly launched an investigation into Barcelona's striker Luis Suarez following reports that the 33-year-old cheated on his citizenship test. In order to complete his move to Juventus, the Uruguayan had to become an Italian citizen, because the club has no space for non-EU citizens. Last week, he flew to Perugia to take a citizenship test, which included a language exam.

According to the city’s public prosecutor’s office, the athlete was given questions in advance and his score was pre-assigned.

"From the investigation, it emerged that the topics in the exam had been agreed in advance with the applicant and that the relative mark had been attributed even before carrying out the exam, regardless of the fact that an elementary proficiency of the Italian language had been verified during remote classes carried out by lecturers of the University for Foreigners”, the public prosecutor’s office said in a statement, as cited by SkySports TV channel.

More from wiretaps about the Luis Suarez/exam story.
“He does not speak a word of Italian. He does not conjugate verbs, he only speaks using the infinitive. If journalists would ask him some questions, he’d be lost. He earns €10m/year, he needs to pass this exam” 🚨 [Repubblica]

​It is unclear what punishment the striker could face if he is found guilty. Details about the future of his career are even more uncertain.

Initially, Juventus were keen to sign the Uruguayan and the sides had reportedly reached an agreement on his contract, but then the club’s manager, renowned midfielder Andrea Pirlo, said it would be difficult for Suarez to move to Turin right now. The Old Lady is now allegedly in talks to sign Alvaro Morata form Atletico Madrid or Edin Dzeko from Roma.

Suarez, meanwhile, is linked with Atletico Madrid. However, media reports indicate that if previously the Catalan club was okay with Suarez leaving as a free agent and joining Juventus, they are not happy with letting him go for free and joining their rival Atletico Madrid. Reports say that Barcelona’s President Josep Maria Bartomeu has personally halted Suarez’s move to Atletico.