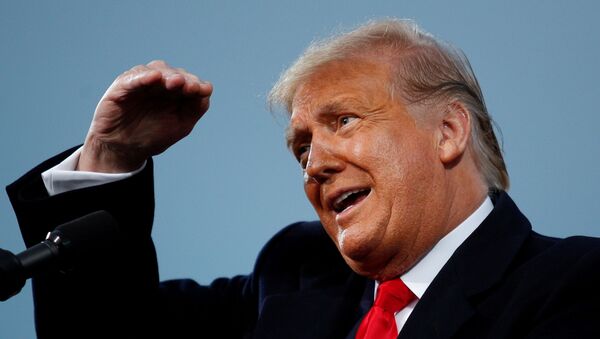 © REUTERS / Tom Brenner
Subscribe
International
India
Africa
Evan Craighead
All materialsWrite to the author
The district attorney’s office for the Manhattan borough of New York City, New York, has suggested in new court filings that US President Donald Trump could be the subject of a tax fraud probe, as “mountainous” public allegations of misconduct exist regarding 45 and his businesses.

Lawyers working for the office of Manhattan District Attorney Cyrus R. Vance Jr. issued a new filing in the US Court of Appeals for the Second Circuit on Monday, arguing that a grand jury probe could be initiated solely based on misstatements and other public allegations about the president’s finances.

“Even if the grand jury were testing the truth of public allegations alone, such reports, taken together, fully justify the scope of the grand jury subpoena,” the lawyers wrote in court documents obtained by Reuters. The outlet highlighted that the document did not directly incriminate Trump or his businesses.

This comes just four days before Vance is scheduled to deliver oral arguments to the appeals court for a subpoena of Trump’s financial records, which are in the possession of his accounting firm, Mazars USA.

Trump’s legal team has previously argued that the release of his records poses a "quintessential type of irreparable harm," despite jurors being sworn to secrecy.

Furthermore, 45 expressed to reporters on August 20 that Vance’s ongoing pursuit of his personal financial records is a “continuation of the most disgusting witch hunt in the history of our country,” referring to special counsel Robert Mueller’s probe into possible Russian interference in the 2016 election.

JUST IN: President @realDonaldTrump responds after federal judge in New York dismisses his latest effort to stymie a grand jury subpoena for his tax returns: "This is a continuation of the most disgusting witch hunt in the history of our country." pic.twitter.com/AwmUPjEvKB

“Let’s get papers from 10 years, every paper, every deal he’s ever signed. Maybe we can find where some lawyer made a mistake where they didn’t dot an ‘I,’ where they didn’t put a comma down some place, and then we can do something,” Trump said. “This is a disgrace, and this should never ever be allowed to happen again.”

Nevertheless, he predicted that the case will “probably end up back in the Supreme Court,” which previously ruled that a sitting US president could not avoid criminal investigations.

With the Friday death of US Supreme Court Justice Ruth Bader Ginsburg, who previously bashed Trump for his failure to publicly release his tax returns, Trump is expected to soon nominate a new Supreme Court justice.

“I will be putting forth a nominee next week. It will be a woman,” he said during a Saturday campaign rally in Fayetteville, North Carolina. “I think it should be a woman, because I actually like women much more than men.”

The appointment of Trump’s nominee would likely deepen conservatives’ majority in the Supreme Court to 6-3, increasing the chances of the court ruling in his favor if the case regarding his finances progresses to that level.