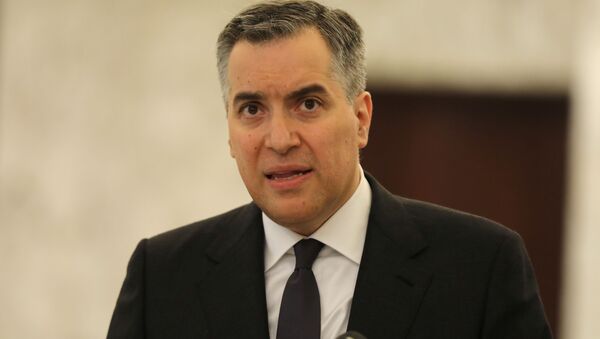 © REUTERS / MOHAMED AZAKIR
Subscribe
International
India
Africa
MOSCOW (Sputnik) – Lebanese Prime Minister-designate Mustapha Adib urged on Monday all the parties responsible for resolving the long-standing national crisis to foster the formation of a new government, in line with France's initiative to help the crisis-stricken country seek financial assistance on the condition of a functional cabinet.

"Pain of the Lebanese people, passing throughout all the country, requires cooperation between all the sides to facilitate the establishment of an action-oriented government, which the parties have previously pledged to support and which is composed of specialists who are believed to have the power to stop the collapse, start working to lead the country out of the crisis and restore the citizens’ confidence in their state and its institutions," Adib said in a statement, as cited by Lebanon’s National News Agency.

The prime minister highlighted that Lebanon could not afford to sit idle amid the month-long unprecedented economic, financial, social and economic crises that the country has been experiencing.

"Everyone should work immediately to ensure the success of the French initiative that paves the way for Lebanon to gain control over the situation and stop its fast deterioration," Adib added.

The official stressed that any additional delay might exacerbate and deepen the crisis, driving the nation into greater poverty.

So far, Adib has failed to present a new cabinet list despite the demand by French President Emmanuel Macron to do so until September 14. The French leader promised to hold a conference in October to gather aid for the country if the government formation deadline was met.

US 'Pressing' Lebanon to Sign Unfavourable Deal With Israel, Analysts Suggest
The process, however, has been complicated by the fresh US sanctions against two former ministers accused by Washington of ties with the Hezbollah political movement.

At the end of last week, Macron and his Lebanese counterpart, Michel Aoun, held talks on the political situation in the Middle Eastern country and agreed on the need to form a new cabinet as soon as possible.

Paris has earlier said that it would not mediate between Lebanon and the international community or seek global aid unless the latter conduct any substantial reforms. Macron did not rule out the possibility of imposing sanctions against Lebanese politicians in connection with the crisis.