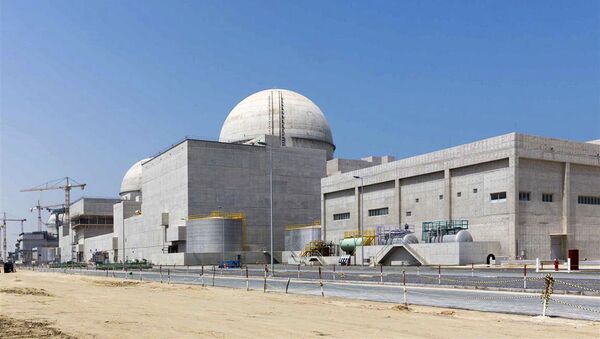 Over the years, the realisation of how risky nuclear energy can be has prompted some governments to shut down their reactors.

Such was the case in Germany, which decided to phase out all its reactors following the Fukushima disaster of 2011; and such was the case in Italy, which has rejected any plans to resume the construction of nuclear plants on its soil.

But there were also those, who decided to go ahead with their plans to generate nuclear energy despite the risks such a move could entail.

On 1 August, the United Arab Emirates became the first Arab country to operate a nuclear power plant, when the first of four reactors at Barakah station achieved criticality.

The project, which is set to be completed in 2021 and has already cost the Arab nation $24 billion, has drawn a great deal of criticism, primarily from neighbouring Qatar, which has been following the developments in the UAE with great concern.

Abu Dhabi has already stated that its project is peaceful. It has reiterated that it has no intention to enrich its own uranium or reprocess spent fuel and has even signed the International Atomic Energy Agency’s protocol to enhance the watchdog's inspection abilities.

But for Qatar, the UAE's decision to go nuclear rather than concentrate on wind and solar energy generation, which are cheaper and more accessible in the Gulf, has stirred allegations that Barakah could be more than just a plant being used for civilian purposes.

However, Ephraim Asculai, a senior research associate at Israel's Institute for National Security Studies and a man who has been working for the country's Atomic Energy Commission for over 40 years, says the region has nothing to worry about.

"Their nuclear plant has nothing to do with military purposes. For them, it is a statement aimed at showing to the world that they are now a nuclear power," the Israeli researcher said, claiming that “nuclear ambitions have been in the books of Syria and Iran”, which is not the case with the UAE.

Throughout the years, the UAE has relied heavily on its rich gas reserves to provide the country with electricity. In fact, only 3 percent of its generation came from solar and oil, whereas 97 percent came from gas, leading to high carbon emissions.

To change that trend and to meet the demand for energy of its rapidly growing population, UAE authorities authorised the construction of Barakah back in the 2000s, and the idea was that once it's completed, the plant would be responsible for generating a quarter of the country's electricity, significantly reducing its dependency on oil and gas and cutting down on pollution in the area.

Yet, critics say that the project still poses a threat to the region, especially in light of UAE's alleged attempts "to cut corners on safety".

In his paper "Gulf Nuclear Ambition: New Reactors in the United Arab Emirates", Dr. Paul Dorfman explains the reasons why Abu Dhabi's power plant was compared to a car "without airbags or a seat belt".

"KEPKO [a South Korean company that won the bid for construction in the Emirates - ed.] acknowledge their Barakah reactor design doesn't contain, arguably essential, features such as either additional reactor containment or a 'core-catcher' - both of which are design features normally expected in all new nuclear reactors in Europe," he wrote.

Dorfman claims that due to the power plant lacking the necessary safety measures, it is unable to defend itself against the harmful release of radiation "in the event of an accidental or deliberate large airplane crash, or military attack".

Asculai, however, tends to downplay these and similar fears.

"If we are talking about the issue of safety, today's reactors are very safe. As far as a potential attack is concerned, I doubt that anyone in their right mind would strike such a big nuclear plant."

Nothing Personal, Only Business: Ex-IDF Pilot Looks Back at Operation That Destroyed Iraq's Reactor
The Middle East has already witnessed several attacks on nuclear facilities. In 1981, for instance, Israel bombarded Iraq's reactor, fearing that the weapons of mass destruction allegedly developed there would eventually be directed at the Jewish state.

Similarly, allegations have also been made about Israeli attempts to hamper progress in Iran's nuclear programme, and now critics of the UAE power plant are fearful that the Islamic Republic, that views the project with concern, might attempt to use similar tactics to sabotage it.

"Iran definitely has the ability to harm the plant if it wanted to. But I doubt that it will attempt to attack it, because the eruption of nuclear material that will be omitted will not only end up harming the UAE but will also spill into the Islamic Republic".