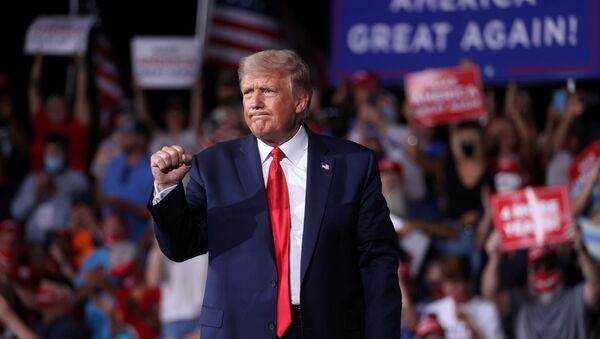 Oleg Burunov
All materialsWrite to the author
On Sunday, US Speaker of the House Nancy Pelosi said that she is not ruling out launching a new impeachment proceeding against President Donald Trump in a bid to prevent the Senate from voting on POTUS’ Supreme Court nominee following the death of Justice Ruth Bader Ginsburg.

US President Donald Trump said to Fox News that he would win the 3 November election even if he faces an impeachment aimed to bar his Supreme Court nominee from being confirmed to the post after Justice Ruth Bader Ginsburg’s death.

“I heard if I [nominate], they’re going to impeach me. So they’re impeaching me for doing what constitutionally I have to do. If they do that, we win [sic] all elections”, Trump claimed.

He argued that if House Democrats go ahead with their impeachment drive, his “numbers will go up.”

“I think we’ll win the entire election. I think we’re going to win back the House […] anyway”, POTUS suggested.

He spoke after Pelosi said in an interview with ABC News on Sunday that she does not exclude launching a new impeachment against Trump as a means of keeping the Senate from voting on the US president’s Supreme Court nominee.

Pelosi accused Trump of threatening “to not even accept the results of the [November] election”, adding that the main goal now is to "protect the integrity of the election as we protect the American people from the coronavirus".

Democrats earlier noted that the next Supreme Court justice should be nominated after the 3 November election.

Later this week, Trump is expected to announce his choice of Supreme Court justice to replace Ruth Bader Ginsburg, who passed away on Friday at the age of 87, due to cancer complications.

On 5 February, the Republican-majority US Senate voted to acquit POTUS after he was impeached by the US House for abuse of power and obstruction to Congress.

This followed developments in September 2019, when the Democrat-led House of Representatives launched an impeachment inquiry into the US president over his 25 July telephone call with Ukrainian President Volodymyr Zelensky, in which Trump reportedly asked officials in Kiev to probe rival presidential candidate Joe Biden, while threatening to hold back US military aid for Ukraine.