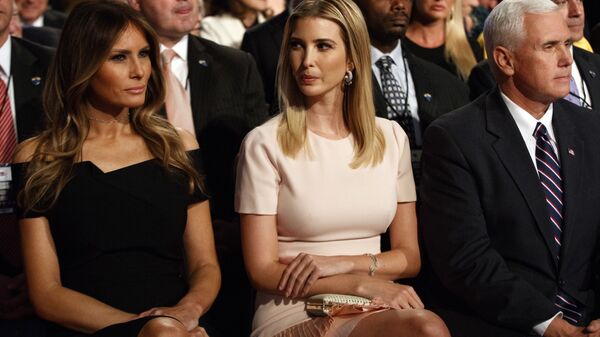 Lilia Dergacheva
All materialsWrite to the author
Melania’s former friend Stephanie Winston Wolkoff, who recently released a memoir about her ties to FLOTUS, says it is “insane” that Donald Trump has already made others come to terms with the prospect of Ivanka assuming the top role in the Oval Office.

Donald Trump is preparing his daughter Ivanka to become the next US President and Melania Trump is “complicit” in the ambitious plans, Stephanie Winston Wolkoff, who used to be one of Melania's closest friends, shared in an interview with 60 Minutes.

The author of the recently released tell-all book “Melania & Me: The Rise and Fall of My Friendship with The First Lady” claimed the first daughter had "usurped" power from Melania.

Claiming that "[Melania] has succumbed" to her stepdaughter's ability “to squash her as the First Lady” in a bid  “to affect change”, the author, who published her explosive revelations last month, a very short while before the presidential polls, went on to indicate that Trump has already shown the world who he has picked for “branding” between the two ladies closest to him.

Winston Wolkoff said despite POTUS apparently choosing his daughter over his wife,  Melania is “complicit" as she doesn’t make an impression of being “unhappy.”

"The Trump family are masters of the dark,” she went on to say, arguing that whenever the president needs “something to distract away from something else, Melania plays a role in that".

Wolkoff claimed her friendship with Melania ended abruptly after Donald's inauguration as POTUS,  which her event planning company was contracted to organise.

The inauguration promptly landed in Trump's critics' crosshairs, becoming the subject of a federal investigation over misused funds, and Winston Wolkoff felt she was being used as a scapegoat.

"[She] stabbed me in the back, and sliced me on the neck and threw me under the bus," Winston Wolkoff told Channel 9.

"They took my life from me in a matter of seconds - the life I built for myself and my children and my husband and my family was crushed by this machine of false narratives,” she recounted, giving her account of events.