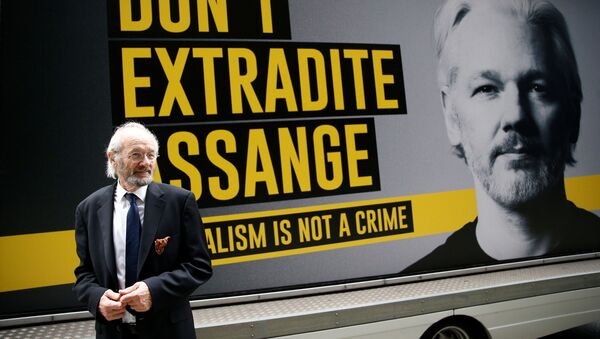 Subscribe
A hearing to judge whether Assange should be extradited to the United States resumed on 7 September at the London Central Criminal Court, after six months of delay due to the COVID-19 pandemic.

The tenth day of proceedings in the trial of WikiLeaks founder Julian Assange's extradition hearing begins on 21 September.

Julian Assange, who has been incarcerated at the maximum-security prison of Belmarsh since his arrest at the Ecuadorian embassy in London in April 2019, is attending the trial from behind a glass panel, away from his defence team.

The hearing is expected to last another two weeks, and it is highly probable that the verdict will be appealed by the losing side.

The US Department of Justice is seeking to extradite Assange on 17 counts of violating the Espionage Act and one count of computer misuse, which carry a maximum sentence of 175 years in prison, for the publication of classified information on the US wars in Iraq and Afghanistan and thousands of US diplomatic cables in 2010 and 2011.

A longer conversation comes about regarding the difficulty of coming to an agreement regarding the witnesses and the statements. Another adjournment has been called to permit Mr Assange and counsel to speak. Following which a WS from Ms Cassandra Fairbanks will likely be read.

More Than 160 Politicians Back Calls for Release of WikiLeaks Founder Assange
13:51 GMT 21.09.2020
Activists Take to London Streets to Support Assange

Down the street and around the corner from the Old Bailey, buses and cars honk their horns in response to two demonstrators holding up signs in support of Julian Assange. pic.twitter.com/HFt5JwnQoE

Prof Grothoff confirms that he found no examples of anyone revealing the passcode to the unredacted cables before David Leigh's book. He also confirmed that uploading docs online with a sufficiently strong passcode is used by finance, medical services and others.

“To some extent would you accept that you are dependent on the contents of those documents [provided by the Defence] being true when piecing the chronology together”? Asks prosecution lawyer.

Prof appears to answer in the affirmative, to a limited extent.

This material was available on the internet in a way that would be "virtually impossible" to stop.

EXAMINATION IN CHIEF IS DONE *** CROSS IS TO BEGIN

10:01 GMT 21.09.2020
‘David Leigh Published Passphrase as Title of a Chapter in His Book Saying It Was Given to Him by Julian Assange’ to Give Access to Unredacted Cables, Prof Grothoff Says

Professor of Computer Science at Christian Grothoff, of Bern University of Applied Sciences, has just been sworn in via video link.

The encryption key was described in David Leigh book as a very long passphrase.. and one can determine how much “brute force” it would take to break the password. Prof Grothoff says adding that “the computational effort would have been prohibitive”.

000000
Popular comments
The shambles of democracy here in the UK with the torie_fascists in control egged on by the evil americ***s. Is astounding to bear witness too & the press are totally silent. Which if you ever thought a conspiracy theory was make believe would now shake the foundations of your psychological realm. We british are not the evil government who helps the vile ussa try to kidnap & disappear Mr Assange. What little worth is left in the establishment of britain had best save his life from extradition too that 3rd world murderous regime.

GunZenBomZ
21 September 2020, 15:02 GMT2
000000
Unfortunately, of all country’s to be in when the most vile empire in the world had their sights on him Assange’s fate was sealed. The UK is nothing but a shameless puppet of the US and will obey their wishes without question. Has the UK not realized the US is crumbling before the eyes of the world and is striking out in a pathetic effort to attempt to appear relevant.