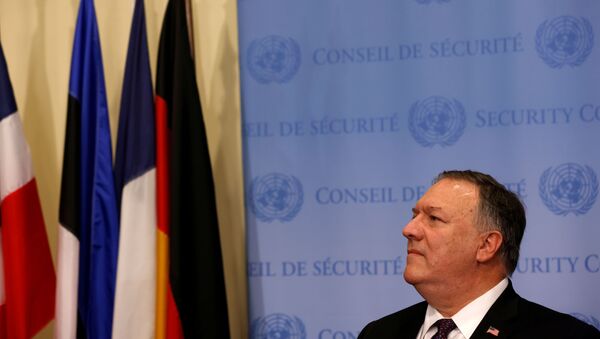 Daria Bedenko
All materialsWrite to the author
On Saturday, US Secretary of State Mike Pompeo announced that UN sanctions against Iran were "back in effect", citing a so-called "snapback mechanism" - envisaged under the 2015 Joint Comprehensive Plan of Action (JCPOA), which the US exited in 2018.

Iran's ambassador to the United Nations, Majid Takht Ravanchi, denounced the recent decision of the administration of US President Donald Trump to impose sanctions on Iran, slamming it as "a clear sign of desperation".

Ravanchi also addressed "US recent failures in UN", apparently referring to the UN Security Council's rejection of a US resolution attempting to prolong the Iranian arms embargo and opposition at the UN to Pompeo's earlier statement that international sanctions on Iran were "back in effect".

According to Ravanchi, US failures in the UN  "only added to US isolation", stressing that the US will never see the return of terminated resolutions "for—in int'l law—they are nonexistent".

"On 20 August, the United States notified the President of the Security Council of Iran’s significant non-performance of its JCPOA commitments. This notification triggered the 30-day process leading to the snapback of previously terminated UN sanctions...[] This means that starting today, all of the provisions of UNSCRs 1696, 1737, 1747, 1803, 1835, and 1929 that were terminated by UNSCR 2231 are back in effect", Pompeo asserted on Saturday.

The US decision today to impose sanctions on Iran has no practical effect; rather, it is a clear sign of desperation after its recent failures at UN which only added to US' isolation.

US will never see the return of terminated resolutions for—in int'l law—they are nonexistent.

​His comments came after US State Secretary Mike Pompeo, accompanied by several other US top officials, on Monday announced new US sanctions on Iran's Defence Ministry, along with the sanctioning of Venezuelan President Nicolas Maduro for allegedly working with "corrupt officials in Tehran" in order to "flout the UN arms embargo".

"The president’s executive order announced today gives us a new and powerful tool to enforce the UN arms embargo and hold those who seek to evade UN sanctions accountable. Today, I will take the first action under this new executive order by sanctioning the Iranian Ministry of Defense and Armed Forces Logistics, and Iran’s Defense Industries Organization and its director", Pompeo said.

In its attempts to restore UN sanctions on Iran, the White House refers to UN Security Council Resolution 2231, which envisaged the so-called "snapback mechanism" that allowed the imposition of punitive measures if Iran violated the terms of the 2015 Joint Comprehensive Plan of Action (JCPOA).

The JCPOA, also known as the nuclear deal with Iran, saw Tehran significantly scale back its nuclear program. It was signed in 2015, but in 2018 the administration of US President Donald Trump unilaterally exited the deal, with the president now describing it as "abject failure".

Despite that the US is no longer a JCPOA participant, DC appeals to the "snapback mechanism" envisaged by the deal, with Pompeo claiming on Saturday that the US notification of Iran's "non-performance" of its nuclear commitments allegedly "triggered the 30-day process leading to the snapback of previously terminated UN sanctions".

Pompeo's statement drew criticism from EU High Representative for Foreign Affairs Josep Borrell, who outlined that the US has no legal right to use a mechanism of the deal because the nation has withdrawn from the treaty.

UN Secretary-General Antonio Guterres also said that the UN is not going to support restoring sanctions on Iran before there is a green light from the Security Council, citing "uncertainty" on whether the snapback mechanism was triggered. The overwhelming majority of the UNSC outlined earlier that the US attempt is illegal, since it is no longer a JCPOA participant state.

Sanctions on Iran were reimposed by US President Donald Trump in May 2018, when he exited the JCPOA, prompting Iran to start suspending its nuclear obligations envisaged by the deal. Tehran insists that the country's nuclear program remains exclusively peaceful.