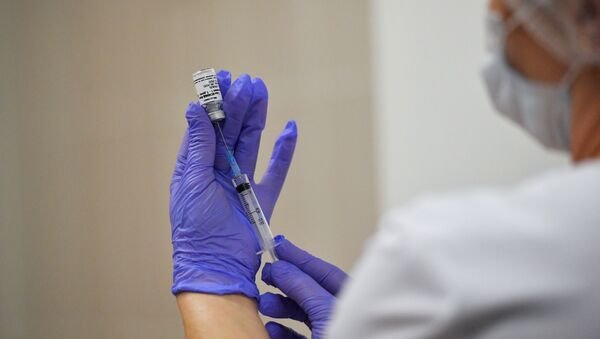 © Sputnik / Vladimir Pesnya
/
Go to the mediabank
Subscribe
International
India
Africa
The testing of the chimpanzee adenovirus-based vaccine has repeatedly been called into question for the “dangerous” lack of sufficient trials on chimp viruses, as well as the unclear consequences of the new technology. The trials of AstraZeneca’s vaccine candidate remain on hold in the US.

Days after AstraZeneca halted the clinical trials of its COVID-19 vaccine over a case of unexplained neurological illness in one volunteer taking part in the study, the British-Swedish pharmaceutical company released a 111-page trial blueprint that promises an anti-coronavirus drug with "50% effectiveness". This was the first time AstraZeneca revealed a second case of a serious illness in one of the participants of its Phase 3 trials in the UK.

The firm has already resumed the trials in the UK, even though one of the participants developed transverse myelitis, an inflammation of the spinal cord, while a diagnosis of the second volunteer remains to be confirmed. However, The New York Times cited a source familiar with the situation as suggesting that the second person suffered the same side-effect earlier, but that this had not been reported by AstraZeneca before. It turned out, that “the first pause, in July, was not publicly revealed and the trial was restarted”, says an article by The Telegraph.

Despite pressure to carry out deeper studies following the two cases of serious illness, AstraZeneca has already resumed trials in Britain, Brazil, India, and South Africa, although the tests are still on hold in the US amid concerns from the National Institutes of Health. "The highest levels of NIH are very concerned", Dr Avindra Nath, intramural clinical director and a leader of viral research at the National Institute for Neurological Disorders and Stroke, an NIH division, told CNN.

This position was shared by FDA experts.

“We’re here to protect the American public and we’re going to do very significant work with the company to figure out if there’s a significant safety issue or not”, FDA Commissioner Stephen Hahn said during an Instagram Live interview with US Republican Senator Tim Scott of South Carolina.

“We don’t have all facts, so we don’t know the causation per se of this, but we really need to look into it. And our prime responsibility is the safety of the American people”, Hahn said.

AstraZeneca has been repeatedly criticised for a lack of transparency by the scientific community. 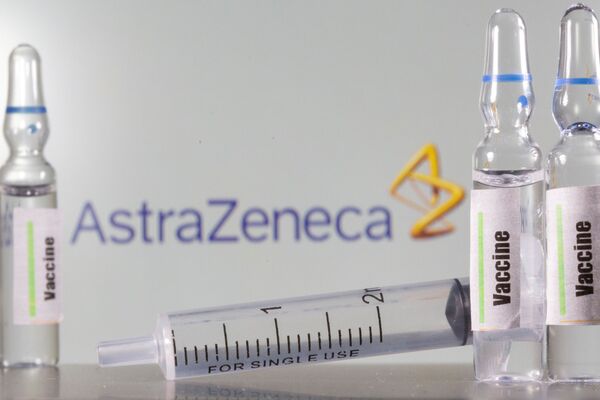 A test tube labelled with the Vaccine is seen in front of AstraZeneca logo in this illustration taken, September 9, 2020
© REUTERS / Dado Ruvic/Illustration

William A. Haseltine, PhD, a former professor at Harvard Medical School and Harvard School of Public Health, told Forbes: "Details for the hold on trials by AstraZeneca have not been fully disclosed and internal discussions are not publicized. It is encouraging to see that they paused trials for the safety of a patient, yet the lack of transparency by the drug company is cause for caution. This vaccine is meant to save lives and return the world to normalcy, but the public is not allowed to know about the daily advancements of the drug? People ought to know more about the safety event in question".

The document, in addition to the disrupted clinical trials of AstraZeneca's coronavirus drug, exposed the risks associated with excessive reliance upon new and unverified technology – the chimpanzee adenovirus. In contrast with the human adenoviral vector, which has been extensively studied and effectively used to produce a number of vaccines and other medicines, the chimpanzee adenovirus has never been used before in any approved vaccine worldwide. According to Russian scientists, the main aspect here is the absence of long-term studies of these vaccines: no one knows if they pose any cancer risks or affect fertility.

The human adenovirus approach is being used by a number of pharmaceutical companies to produce a COVID-19 vaccine, namely China's CanSino and the US' Johnson & Johnson, as well as Russia's Sputnik V vaccine, produced by the Gamaleya Research Institute.

On 11 August, Russia's Gamaleya Institute officially registered the world's first vaccine, dubbed Sputnik V, after two successful phases of testing proved that it was capable of building immunity against the virus in all of the volunteers involved in the tests. Currently, Russia is carrying out post-registration clinical trials of the drug, involving over 42,000 people in Russia and around the world.

Russia’s RDIF has already announced plans to manufacture 500 million doses of the vaccine over the next year, with production and clinical trials expected to take place in five other countries as well.

Earlier in September, distinguished medical journal The Lancet published the results of the Phase 1 and Phase 2 trials of Russia's Sputnik V vaccine, concluding that the Russian drug is safe and effective, and that the scientists didn’t find any serious adverse effects from it.