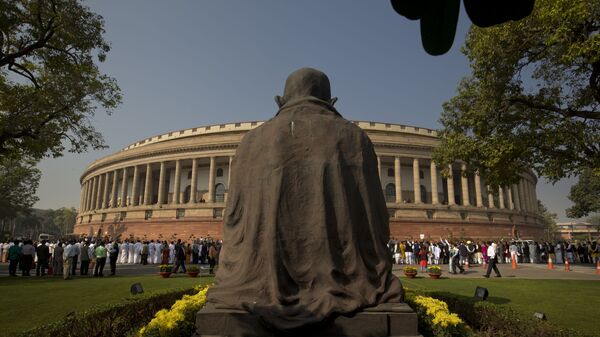 © AP Photo / Manish Swarup
Subscribe
Nair N.B.
Sputnik correspondent
All materialsWrite to the author
India’s ruling party BJP is introducing farm sector reforms, which the opposition parties claimed are not in the interest of farmers. The Lok Sabha, the lower house of parliament, passed the legislation on 19 September, amid protests from opposition parties and an ally of BJP.

A day after the Indian parliament’s upper house witnessed unprecedented chaos during passage of a farming Bill, eight opposition members were suspended for the rest of the ongoing Monsoon Session on Monday.

The brief session of parliament’s upper house, the Rajya Sabha, however, is set to continue until 1 October.

Chairman of the House and Vice President M. Venkaiah Naidu on Monday said, “I am pained at what happened yesterday. It defies logic. It is a bad day for the Rajya Sabha.”

Amid the chaos, the Bill was passed on Sunday (20 September). It was earlier cleared by the Lok Sabha, the lower house of the parliament, and would now go to the President Ram Nath Kovind for approval before being signed into law.

Opposition parties alleged the proposed Bill would place power into the hands of corporations, and farmers would be deprived of a fair price for their produce.

Their main contention was that the minimum support price for agricultural produce would be scrapped, placing the farmers at the mercy of private procurement agencies.

The government, on the other hand, said it would introduce major reforms to the lives of farmers.

“System of MSP will remain. Government procurement will continue. We are here to serve our farmers. We will do everything possible to support them and ensure a better life for their coming generations,” Modi said in a tweet on Sunday.

I said it earlier and I say it once again:

System of MSP will remain.

We are here to serve our farmers. We will do everything possible to support them and ensure a better life for their coming generations.

​Former Congress Chief Rahul Gandhi condemned the legislation as a “death warrant” for the farmers.

“The Modi Government’s arrogance would bring tears of blood to the eyes of farmers, who cultivate ‘gold’ from the farmland. The bill passed in the Rajya Sabha today by the government is in fact a ‘death warrant’ for the farmers, which is shameful for democracy,” tweeted Rahul Gandhi in Hindi on Sunday.

​The two bills – Farmer’s Produce Trade and Commerce (Promotion and Facilitation) Bill 2020 and the Farmers (Empowerment and Protection) Agreement of Price Assurance and Farm Services Bill, 2020 – ares slated to replace two corresponding ordinances issued by the federal government when the parliament was not in session.

Regional Shiromani Akali Dal, an ally of the ruling Bharatiya Janata Party (BJP) has withdrawn its lone member in the federal ministry, Harsimrat Kaur Badal, in protest against the legislation.

Meanwhile, thousands of farmers in the northern states of Punjab, Haryana and Uttar Pradesh are continuing their protests against the bills.

They have blocked the main national highway in Haryana state and vowed to continue the agitation until the federal government withdraws the legislation.