1,000-Year-Old Runestone Plowed Up From Swedish Field in 'Find of the Year' 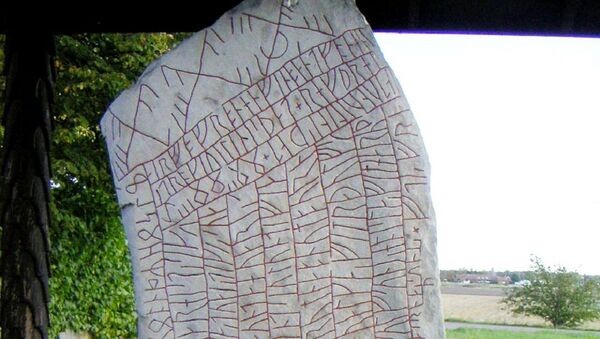 CC0 / Bengt Olof ÅRADSSON /
Subscribe
International
India
Africa
Igor Kuznetsov
All materials
As authentic runestones are few in number, the spectacular find marks a new milestone for local lore and language research, as it sheds new light upon the the Viking era.

A Swedish farmer from Småland County has come across a large flat rock while plowing, as his tractor bumped into something. The rock, covered with intricate runes, has been dubbed “the find of the year” by archaeologists.

At first, he took it for an ordinary stone covered with dirt, and intended to use it as a stepping stone. However, a closer look revealed an ancient inscription which was made using Viking runes.

The runestone has so far been unknown to researchers and is therefore especially interesting, national broadcaster SVT reported.

“It is in very good condition. It is unusual to find runestones in such fine condition. It must have fallen over a long time ago because the field has been in use for a long time. It was a mere coincidence that he hit the stone with the plow and could find it. It was upside down”, Veronica Palm, archaeologist and deputy director at Västervik's museum, told national broadcaster SVT, calling the find “spectacular”.

Runologist Magnus Källström attested that the stone is unique, dating it to the first half of the 11th century. He was even able to decipher: “Gärder raised this stone after Sigdjärv's father, Ögärd's husband.”

It had been known before that a wealthy and noble family lived at the site, when silver finds were previously discovered. The runestone marks a new milestone for local lore and language research.

“It is an interesting female name, Ögärd, it has not been seen before,” Veronica Palm told the newspaper Aftonbladet.

Hellerö outside Loftahammar was an important place during the Late Iron Age, yielding a number of notable finds, including silver coins.

The County Administrative Board in Kalmar will now clean and preserve the stone, which will then be made available to the public.

The tradition of raising runestones emerged in Scandinavia in about the 4th century and lasted into the 12th century. Runestones are often memorials to dead men and were usually brightly coloured when erected, though this is no longer evident as the colour has worn off. Most runestones are found in present-day Sweden.

The Rök stone in Rök in Östergötland is one of the most famous rune stones. With its 760 characters, its inscription is considered to be the world's longest runic inscription.