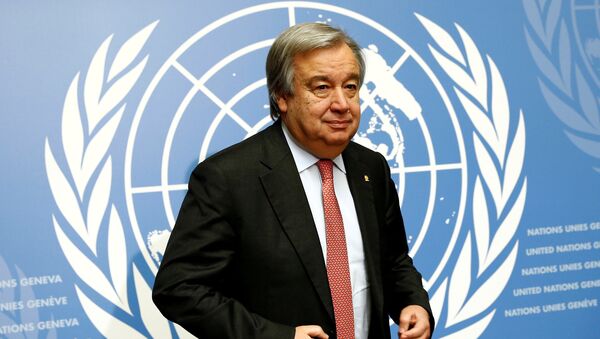 Oleg Burunov
All materialsWrite to the author
Earlier on Sunday, the Iranian Foreign Ministry slammed Washington’s announcement on the restoration of all UN sanctions against Tehran as something that poses “the biggest threat to peace and international security”.

In a letter to the UN Security Council seen by Reuters, Secretary-General Antonio Guterres stated that he cannot take any action on the US declaring the reinstatement of all UN sanctions against Iran due to what he described as uncertainty related to the issue.

The remarks come as Iranian Foreign Ministry spokesman Saeed Khatibzadeh hit out at the US over its anti-Iranian sanctions-related announcement, urging the White House to reconcile with the international community and get back to observing its legal commitments.

He also described the actions as making the US appear as "the biggest threat to peace and international security", also insisting that claims about the restoration of the sanctions are false, as no such developments have taken place at the UN Security Council.

The statement was echoed by that of the Russian Foreign Ministry, which accused the US of continuing to mislead the international community by “speculating that the UN Security Council conducted some sort of procedures to restore the effect of UNSC resolutions on Iran sanctions, which were cancelled after the signing of the 2015 Joint Comprehensive Plan of Action (JCPOA)”, also known as the Iran nuclear deal.

This was preceded by US Secretary of State Mike Pompeo announcing on Saturday that all UN sanctions against Iran were "back in effect" under the “snapback” mechanism of UN Security Council Resolution 2231, which was featured in the JCPOA. Pompeo vowed that UN member states would face "consequences" if they refused to implement the sanctions.

This followed the US special envoy on Iran, Elliott Abrams, saying on Wednesday that Washington would impose the "full force" of its sanctions on any arms producer dealing with Iran once the US reaches its goal of reinstating a UN Arms Embargo on Tehran.

World
Iran Nuclear Deal Participants Unanimously Reject US-Triggered Snapback Sanctions, Moscow Says
Last month, the US tried to trigger the so-called snapback mechanism under Resolution 2231 in order to reinstate sanctions against Iran that were previously lifted under the JCPOA.

The draft resolution, however, did not receive sufficient support for its adoption by the Security Council, with Tehran warning that an arms embargo extension would mean the death of the nuclear deal.

The developments came amid US-Iranian tensions, which have persisted since the US’ unilateral withdrawal from the JCPOA in May 2018 that prompted Iran to scale back on its commitments under the accord.