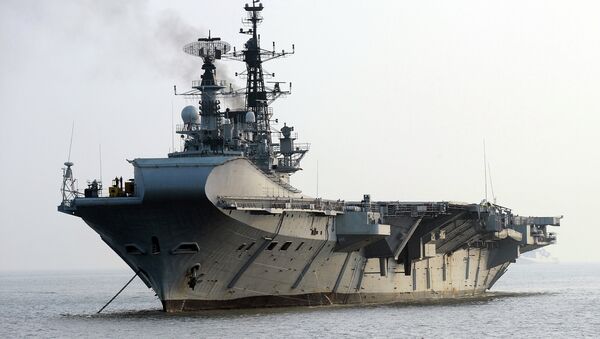 Radhika Parashar
All materialsWrite to the author
After having served in the UK’s Royal Navy as the HMS Hermes, the vessel was inducted into the Indian Navy back in 1987. In India, the ship was renamed the “Viraat”, which is the Hindi word for “gigantic”. True to its name, the vessel weighs 27,800 tonnes and holds the Guinness World Record for being the longest-serving warship in the world.

After being decommissioned back in March 2017, the Viraat is cruising for one last time on its way from Mumbai to Alang – a quaint beach town located in India’s Gujrat state that has the biggest ship-breaking yard in the world. In Alang, the veteran aircraft carrier will be dismantled and its parts sold off as scrap.

... the Spirit lives on pic.twitter.com/RaAuCVPjGM

​Retired army personnel, their family members, along with history-enthusiasts, have been bidding teary-eyed farewells to the ship that contributed to the British and Indian forces in several troubled times, like the days of “Operation Jupiter” (1989) and “Parakram” (2001).

INS virat was personally very close to me as my dad served his entire time in the Navy on this beauty. Had the honour of dining on board this elegant lady. Bid adieu "hermes" pic.twitter.com/zkVJDOe7Gz

End of an era #INS #Virat departs for a final journey...Salute to #R22 #IndianNavy pic.twitter.com/7XyoUyuwbz

After serving indian navy service for 30 years. It will dismantled in Alang, The biggest ship breaking Yard.

INS VIRAT is in our heart.

Make war memorial of this Ocean King, that will be inspiration to youth #INSViraat #saveINSViraat@HMOIndia @indiannavy @PMOIndia

​Discussions around converting the veteran vehicle into a museum or restaurant did make the rounds in recent years, but neither of those plans worked out.