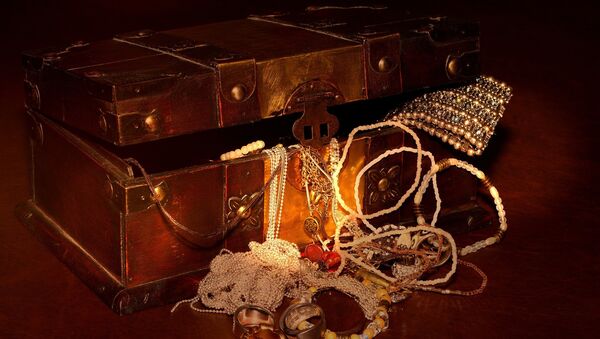 Max Gorbachev
All materialsWrite to the author
In 2010, Forrest Fenn, an art and antiquities collector, published his memoir "The Thrill of the Chase", in which he wrote about a chest containing a treasure that he hid somewhere north of Santa Fe, a city in New Mexico in the US. According to various estimates, since 2010, hundreds of thousands of people have attempted to find the stash.

Treasure hunters and adventure-seekers still argue whether the chest containing the treasure of millionaire Forrest Fenn is real or whether the whole initiative is a hoax. Treasure hunter Reed Randall believes he found the location where the stash was supposed to have been hidden. Following clues to the treasure’s whereabouts in a 24-line poem published in Fenn’s memoir, Randall discovered a place that matched the final clue in the poem, but after a few hours of digging, he realised that the hole was too deep for an old man (Forrest Fenn was 80 years old when he hid the chest) to have dug.

Randall came to the conclusion that if the treasure wasn’t there, then there was no treasure in the first place and Fenn had simply fooled people. So he decided to trick the millionaire. He took a picture of the scene and emailed it to Fenn.

"I know your secret", wrote Randall, implying that the treasure hunt was a hoax.

On 6 June, Forrest Fenn announced that after 10 years of searching, someone had finally discovered his treasure, which was "under a canopy of stars in the lush, forested vegetation of the Rocky Mountains and had not moved from the spot where I hid it more than 10 years ago".

10 days after the announcement, Fenn wrote that he doesn’t know the identity of the lucky finder, but noted that "a poem in my book led" the individual to the "precise spot" where the chest was hidden. Fenn also posted pictures of the hidden treasure that were allegedly sent to him by the man who had found it.

Randall believes that the timing of Fenn’s announcement was suspicious and like many other treasure hunters who searched for the chest for 10 years, he claims that the hunt was simply a hoax.

Fenn was as a pilot in the US Air Force and, according to him, flew 328 combat missions during the US' War in Vietnam and was shot down twice. He used his position to fly in other countries, where he searched for valuable items and artefacts.

"I was thrown out of Pompeii three times. But I found amphora full of olive oil and full of wine", Fenn told journalist Tony Dokoupil.

Dokoupil, however, claims that Fenn wasn’t merely an antiquities collector, but actually robbed graves. Whether or not it is legal to take objects discovered at ancient sites depends on the country, but in the United States it is illegal. Dokoupil said he spoke with the children of Fenn’s former digging buddy. "You can't dig out there without digging up some graves”, one of the children said about Fenn’s activities in the state of Arizona, where the collector worked as a teacher at Luke Air Force Base.

Dokoupil also noted that Fenn’s house was raided in 2009 by the FBI as part of an investigation into illegal diggers. Back then, the agency seized a handful of artefacts, but Fenn was not charged.

In 1988, Fenn was diagnosed with cancer and given the prognosis that it would be terminal. He later recovered from the disease, but said his battle with cancer had inspired him to start the treasure hunt. In 2010, he published a memoir where he gave clues in a 24-line poem to the whereabouts of his treasure. Back then, the collector said his stash contained jewellery, gold coins, gold nuggets, precious gems, and other valuables. The whole treasure was estimated to be valued at between $1 and $3 million. Fenn said he decided to hide his treasures because he wanted people to get into the wilderness and give them an opportunity to embark on an old-fashioned adventure.

The millionaire’s initiative drew the attention of thousands of people. Websites, groups on social media, blogs, and YouTube channels have been dedicated to Fenn’s treasure. According to the collector, 500,000 people have searched for the stash, other estimates put the number at 250,000. Many people quit their jobs to devote time to treasure hunting, while five people have died in the process.

In 2017, New Mexico police asked the art and antiquities collector to call off the hunt following the death of a treasure hunter, but Fenn refused.

The millionaire also noted that the place where the treasure is hidden is not dangerous and that he personally took the stash to the hiding place when he was 80 years old.

Over the past decade, Fenn received thousands of emails from treasure hunters and is said to have answered every letter.

Sandy Olsen (not her real name) said she started communicating with the collector in 2018 after she learned about the stash. According to the woman, the two emailed each other almost daily. Fenn reportedly invited her to visit him and asked her to send him a photo of herself. Olsen sent him a photo waist up.

"You are a very pretty girl", Fenn wrote, "but I can’t see your tattoos", referring to tattoos on her chest, which she got to cover scars left from a mastectomy. Olsen claims Fenn kept asking for photos and when she refused, he reportedly stopped talking to her.

Another woman, Mindy Fausey, claims Fenn asked her to send nude photos of herself after the two started communicating via email. Fausey then decided to post screenshots of Fenn’s email online. She says she did not do so because she wanted to let people know what kind of a person the millionaire was, but to make people understand that a close relationship with Fenn could compromise the treasure hunt.

Speaking with The Guardian via email, Fenn categorically denied allegations of inappropriate behaviour, calling the claims fake. "I am aware of several fake emails that say I did", Fenn said. The art and antiquities collector said the women who had accused him were "angry with me because I would not help them find the treasure".

Fenn died of natural causes on 7 September 2020. While some people, like Reed Randall, believe that his stash was a hoax, others contend that it is real and thanked the collector for making them embark on an interesting adventure. Still others say the chest has not been found and is still somewhere out there, or that the millionaire took it himself.

In an interview in 2016, Fenn said he would never reveal where he hid the treasure.

"If I die tomorrow, the knowledge of that location goes in the coffin with me", he said.