Not an Iceberg? New Study Reveals What Else Could Have Been Behind Titanic Disaster 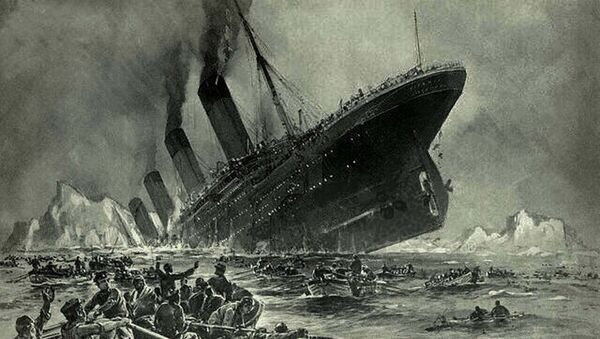 Lilia Dergacheva
All materialsWrite to the author
A researcher has suggested that there is something which could have altered the Titanic’s navigational readings, bringing about a collision with an iceberg that killed almost 1,500 passengers.

The Titanic could have hit an iceberg in the North Atlantic after being pushed off course by intense space weather, Mila Zinkova, an independent US researcher and a retired computer scientist, has suggested in a new study, which claimed that a huge solar flare in the northern hemisphere may have actually caused the disastrous crash.

The researcher cited evidence of strong solar activity on the night the Titanic sank - 15 April 1912 - suggesting that a massive solar storm could have caused the magnetic compass on board the Titanic to point slightly away from the magnetic north, thereby prompting the vessel to change its course a bit.

“A negligible compass error”, which might have resulted from a geomagnetic storm, could have placed the Titanic on a collision course, impacting both navigation and communication, Zinkova wrote, also outlining the recovery efforts after the disaster, which led to as many as 1,496 deaths.

“The Titanic struck an iceberg at 2340 ship time on 14 April 1912 (0310 UTC, 15 April) in light winds and a relatively calm sea state”, the researcher said, adding that it was the Titanic’s Fourth Officer Joseph Boxhall who had “worked out the ship’s SOS position”. Boxhall’s position was around 13 nautical miles (24 km) off their real position, Zinkova remarked, adding that promptly thereafter, the rescue ship Carpathia received the wrong position, “but somehow miraculously streamed directly to the Titanic’s lifeboats”.

Eyewitness accounts from the time, including Titanic survivor and author Lawrence Beesley, suggest there were auroras in the skies around the time of the deadly collision.

"We were not certain of the time and were eager perhaps to accept too readily any relief from darkness — only too glad to be able to look each other in the face and see who were our companions in good fortune; to be free from the hazard of lying in a steamer’s track, invisible in the darkness”, recalled Beesley, adding, though, that they were ultimately left disappointed.

He went on to depict how the “the soft light” lingered there for some time, gradually dying out, before glowing again. “'The Northern Lights!' It suddenly came to me, and so it was”, he recalled.