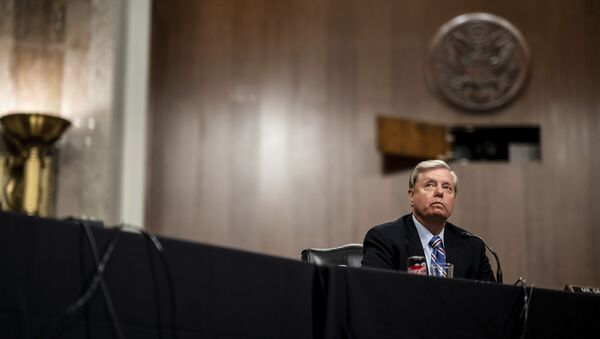 Asya Geydarova
Editor
All materialsWrite to the author
In the footage, Graham argues that if a judge seat becomes vacant during an election year, a nomination should only be considered after a new presidential election has taken place.

Chair of the Senate Judiciary Committee Lindsey Graham has come under pressure after a 2016 video of him reemerged on social media.

"I want you to use my words against me. If there's a Republican president in 2016 and a vacancy occurs in the last year of the first term, you can say Lindsey Graham said let's let the next president, whoever it might be, make that nomination", Graham says in the video.

The speech took place at a Senate meeting where Republicans blocked the nomination of Merrick Garland, chosen by Barack Obama as a replacement for former Supreme Court Justice Antonin Scalia, who died in the year of the 2016 presidential race.

"We're setting a precedent here today, Republicans are, that in the last year – at least of a lame duck eight-year term, I would say it's gonna be a four-year term – that you're not gonna fill a vacant seat of the Supreme Court based on what we're doing here today. That's gonna be the new rule."

“I want you to use my words against me. If there’s a Republican president in 2016 and a vacancy occurs in the last year of the first term, you can say Lindsey Graham said let’s let the next president, whoever it might be, make that nomination." pic.twitter.com/quD1K5j9pz

The video of Graham has gone viral in the wake of the death of Supreme Court Justice Ginsburg, which prompted President Donald Trump to use the opportunity to nominate a Republican figure for the post while he is still in office.

Trump told reporters on Saturday that he will be putting forward the nominee next week, adding that it will be a woman.

Most Democrats have said that the next Supreme Court justice should not be nominated until the next president is installed, echoing 2020 Democratic candidate Joe Biden and former president Barack Obama, who cited the 2016 refusal to consider nominating a new justice in the course of the election campaign.

On Friday, Ginsburg passed away at the age of 87 due to cancer complications at her home in Washington. According to media reports, she told her granddaughter shortly before her death that she wished for her seat to remain vacant until after the next presidential election takes place.