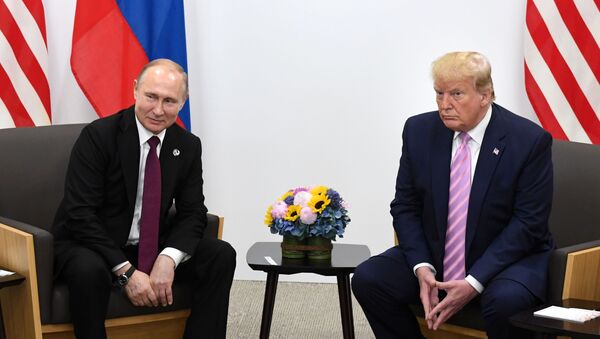 MOSCOW (Sputnik) - US President Donald Trump expressed perplexity during a campaign speech in Bemidji, Minnesota on Friday as to why would anyone criticize him for aiming to be on good terms with Russian President Vladimir Putin.

Citing FBI Director Christopher Wray's claims about Russia's alleged meddling in the US elections from the day before, Trump said "Here we go again — Russia, Russia, Russia. What about China? What about North Korea? What about Iran? They don't mention anybody else. The narrative seems to be Russia."

At the same time, Trump noted that "there has never been anybody so tough on Russia with the sanctions."

The US is set to hold a presidential election on 3 November.

The United States earlier accused Russia of meddling in its political processes, in particular, during the 2016 presidential election. Moscow has consistently denied the allegation, demanding for it to come with facts to be valid.