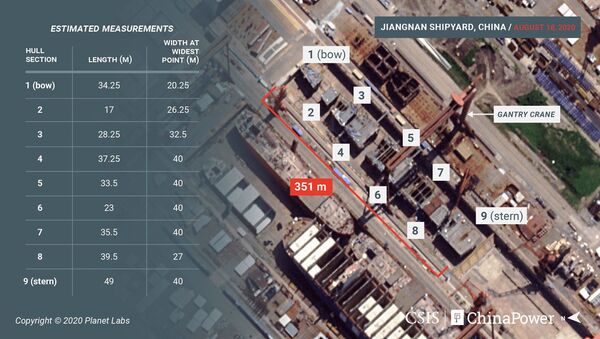 Evan Craighead
All materialsWrite to the author
New commercial satellite photos of the Type 002, the Chinese People’s Liberation Army Navy’s (PLAN) third aircraft carrier and second domestically built flattop, provide the clearest view yet of the vessel following extensive construction and relocation, according to a new report published by a Washington, DC, think tank.

The China Power Project (ChinaPower) of the Center for Strategic and International Studies updated its "Tracking China’s Third Aircraft Carrier" page on Thursday with new satellite imagery taken from the Jiangnan Shipyard in Shanghai, China, on August 18, 2020.

“For the first time since construction began, the vessel’s hull blocks are laid out in order of construction and uncovered by environmental shelters, allowing the clearest view yet of the carrier,” the ChinaPower analysis detailed, noting that the Type 002 was moved to a new location at the shipyard sometime between May 24 and June 2. 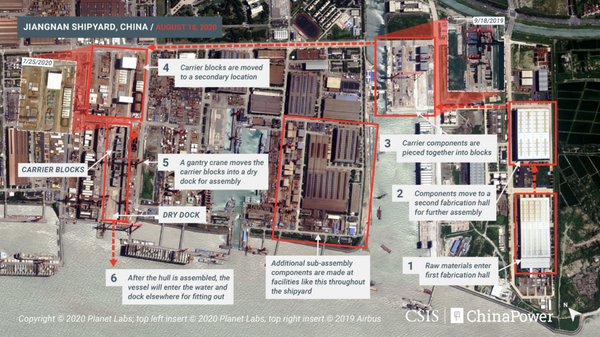 “There are nine hull blocks spaced out on the dry dock. The blocks stretch roughly 351 meters from bow to stern (including the spaces between them). Excluding these spaces, the vessel’s visible hull blocks total roughly 297 meters in length,” the report detailed. “The longest block, which comprises the stern, is about 49 meters in length. In terms of width, the widest hull blocks measure approximately 40 meters.”

“As construction continues, we expect the vessel to lengthen by several meters with the addition of the flight deck,” ChinaPower clarified.

Responding to the PLAN’s rumored progress on the ship, Commander of US Fleet Forces Adm. Chris Grady argued that China’s sea power developments make “the argument that carriers are important.” 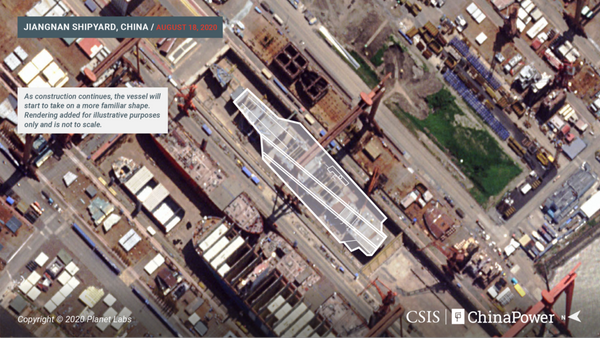 The China Power Project (ChinaPower) of the Center for Strategic and International Studies shows Planet Labs satellite imagery of the Type 002, with illustrative rendering added.
© ChinaPower/CSIS

“To me that makes all the sense, they’re a maritime power, and they understand the great value that comes from carrier aviation and how that can shape the international environment. It’s taken us over 100 years to get that right,” Grady said on Thursday during the American Society of Naval Engineers 2020 Fleet Maintenance Modernization Symposium.

“Go ahead and build that big ship.”

Military.com drew comparisons between the Electromagnetic Aircraft Launch System (EMALS) rumored to be planned for the Chinese carrier and that on the over-budget, first-of-its-class USS Gerald R. Ford, which has been beset with major design flaws that impeded its anticipated first tour of duty in 2018.

Capt. Kenneth B. Sterbenz, program manager of the US Navy’s Aircraft Launch and Recovery Equipment Program, recently announced that the Ford’s Advanced Arresting Gear (AAG) and EMALS completed had 4,000 launches and recoveries during the Post Delivery Test & Trials (PDT&T) period.

The service is now focused on establishing reliability in the AAG and EMALS. If positive developments continue, officials estimate that the Ford will be ready for tasks by 2022, Rear Adm. John Meier, the head of Naval Air Forces Atlantic, revealed during the Tailhook Association’s virtual symposium on Saturday.

“We’re still not where we want to be, but we’ve made great strides and we’re getting better every year,” he said.

ChinaPower stated that, based on current satellite imagery and knowledge, “it is not yet possible” to assess whether the Type 002 will feature an EMALS, “but unofficial sources suggest that China has made significant headway in developing this technology.”

Sputnik reported in late August that the PLAN may pursue the construction of a unique assault carrier equipped with an EMALS capable of propelling unmanned aerial vehicles such as rotary-wing drones.

The proposed Type 076 landing helicopter dock would likely allow the carrier to transport at least 30 helicopters, an array of armored, amphibious combat vehicles and hundreds of Chinese marines for land attacks, according to the South China Morning Post.