Netizens Puzzled by Video of Woman Twerking on Top of Coffin 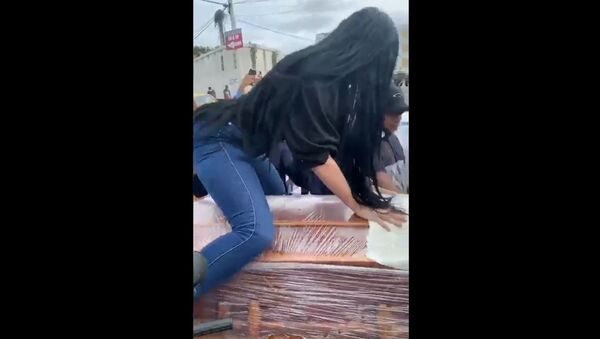 Asya Geydarova
Editor
All materialsWrite to the author
It appears that the scene occurred at her boyfriend's funeral, making netizens wonder if it was some kind of ritual, criticise her for indecent behaviour, and even make jokes about the video.

Footage of a young woman dancing on top of a coffin in front of a cheering crowd has gone viral on social media.

The woman was captured twerking on top of her boyfriend's coffin during a funeral with hip-hop music playing in the background, while at the same time she seems to be crying and bends over from time to time to place a kiss. According to media reports, the scene took place in Ecuador.

If yo girl don’t do this at yo funeral is she really yo girl? pic.twitter.com/TxbYLkm661

Netizens were left divided in their comments about the scene, but most felt awkward, wondering if it was some kind of tradition or just her own way of expressing grief.

I guess everybody grieves different but this takes it to a whole nother level pic.twitter.com/kg9ol5P8N3

She is twerking through the tears 😭

— All Cops are bastards Especially your Dad (@PermedMalcolmX) September 14, 2020

This finna be me if she don’t pic.twitter.com/0FXaKosG3D

A lot of users still said it was a disrespectful thing to do at a funeral, adding that they would not tolerate it if encountered in real life.

ngl that's disrespectful on so many levels. If it were me I would slap the sh*t outta somebody if they did that on my grave or something.

Nah, everybody at my funeral gotta have the viola face pic.twitter.com/J7iLbzgPut

Other Twitterians referred to a belief that people who passed away would want us not to grieve but to live a happy life, even without them.

It is a Mexican belief to not fear death but instead accept it as a natural and just the way life goes on.