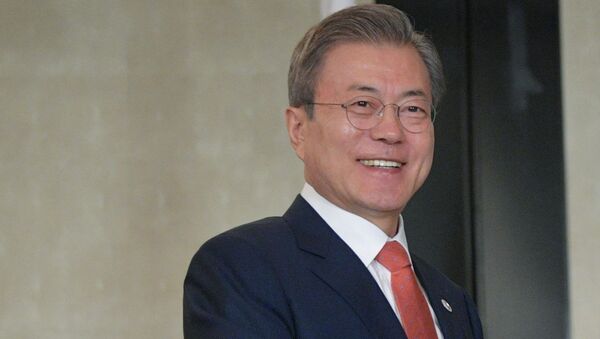 SEOUL (Sputnik) - South Korean President Moon Jae-in said on Friday that it would be impossible to achieve longed-for peace with its northern neighbor without maintaining a dialogue.

"If (we) don't give up hope for meetings and dialogue, we will surely move on to the path of peace and unification," the Yonhap news agency quoted Moon as saying while speaking at the meeting with South Korea's Buddhist community leaders.

The president's statement came ahead the second anniversary of the Pyongyang summit deal the two Koreas reached in 2018.

According to the media outlet, Moon also asked the Buddhist community to assist in the inter-Korean exchanges and advance the path of peace on the peninsula.

North and South Korean leaders held three summits in 2018 — in April, May and September — aimed at reducing tensions and increasing the cooperation between the states. In particular, the talks were focused on the denuclearization on the Korean Peninsula.

The leaders also agreed upon setting up the joint Liaison Office in North Korea’s border city of Kaesong and using it as a communication channel between the two countries. However, it was demolished by North Korea in June 2020 due to the worsening of bilateral relations with Seoul, which, according to Pyongyang, had been unable to prevent North Korean defectors living in South Korea from distributing anti-North Korean regime leaflets across the border via balloons.