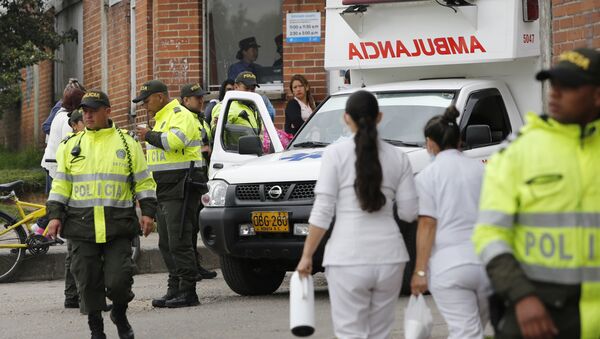 MEXICO CITY (Sputnik) - Two women were hospitalized with injuries in the Arauquita region of Colombia's northeastern Arauca state as a result of the explosion of a truck loaded with explosives, Colombian media reported on Friday.

According to El Espectador newspaper, the truck detonated at around 1 p.m. on Thursday (18:00 GMT) in the Villa Jesus district near a local military base.

Two women aged 25 and 35 were reportedly injured by the blast and taken to the San Lorenzo hospital with non-life-threatening injuries, according to the report. The blast reportedly also damaged the nearest residential building.

The preliminary assumption is that the truck was headed to the military base and detonated prematurely.

The Arauca state is home to a paramilitary group called the National Liberation Army (ELN), which is Colombia's second-largest to the Revolutionary Armed Forces of Colombia — People's Army. The Colombian government and several other countries and organizations, including the United States and the European Union, designated the ELN as a terrorist organization.