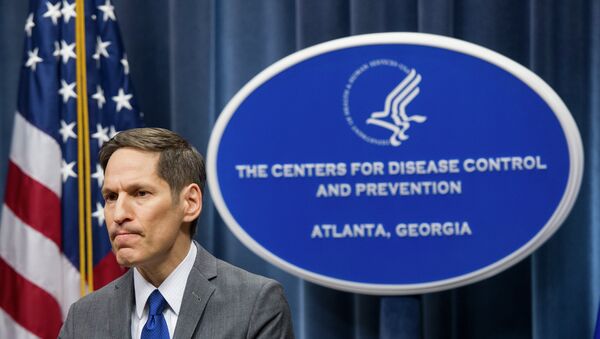 © AP Photo / John Amis
Subscribe
International
India
Africa
A controversial recommendation by the US Centers for Disease Control and Prevention (CDC) released last month about who should be tested for COVID-19 has been revealed to have not been written by CDC scientists and to have been posted to the agency’s website over their objections.

The updated guidance posted on the CDC’s website on August 24 stated that it wasn’t necessary to test people without COVID-19 symptoms, even if they had been exposed to the virus.

Some Trump administration officials who spoke with the New York Times said the CDC had written the guidance itself with input from its director, Robert Redfield, but other government officials have now told the Times that the Department of Health and Human Services (HHS), the CDC’s parent agency, rewrote the guidelines and posted them on the CDC’s website.

“Suggesting that asymptomatic people don’t need testing is just a prescription for community spread and further disease and death,” Dr. Susan Bailey, president of the American Medical Association, commented on the testing guideline in a statement to the New York Times.

The Infectious Diseases Society of America, which works closely with the CDC, also strongly criticized the recommendation.

“We’ve communicated that to the CDC and HHS, but I have not seen any signs that they’re going to change it,” Amanda Jezek, a senior vice president at the organization, told the New York Times.

“That was a doc that came from the top down, from the HHS and the task force,” said a federal official with knowledge of the matter, referring to the White House Coronavirus Task Force. “That policy does not reflect what many people at the CDC feel should be the policy.”

The document also mentions “testing for COVID-19,” instead of testing for SARS-CoV-2, the virus that causes COVID-19. Such mistakes suggest that the document was not written by CDC scientists, a senior scientist at the agency who spoke on the condition of anonymity told the Times.

In an interview Thursday with the Times, Adm. Brett Giroir, the administration’s testing coordinator and an assistant secretary at the HHS, said that the CDC wrote the original guidance, but that he “coordinated editing and input from the scientific and medical members of the task force.”

The draft was revised around 20 times over the course of a month, with comments from Redfield and Director of the National Institute of Allergy and Infectious Diseases Anthony Fauci, alongside others.

However, Giroir was not able to explain why the recommendations did not undergo the appropriate scientific review by the CDC before they were posted.

“I think you have to ask Dr. Redfield about that. That certainly was not any direction from me whatsoever,” he said.

During a congressional hearing Wednesday, Redfield said that the agency is revising the guidelines. A federal official familiar with the matter said that the revision was being completed by a CDC scientist but was being edited by the HHS and White House Coronavirus Task Force.

A federal official also told the Times that a new version of the guidance expected to be posted on Friday has not been approved by the CDC’s internal review for scientific documents and is currently being evaluated by HHS officials.

In addition, a document titled “The Importance of Reopening America’s Schools this Fall” was also published on the CDC website in June and strays from the CDC’s usual neutral tone, officials told the Times.

Last week, current and former senior health officials also revealed that political appointees at the HHS have asked the CDC to revise, delay and meddle with weekly COVID-19 reports that did not paint the Trump administration in a positive light.

According to the Times, Redfield has been described by CDC employees and outsiders as a leader who is too weak to protect the agency from the Trump administration’s meddling, tarnishing its reputation among the public.

“It feels like a setup,” one CDC scientist noted.

“There’s nothing they can do that gets them out of this blame game.”