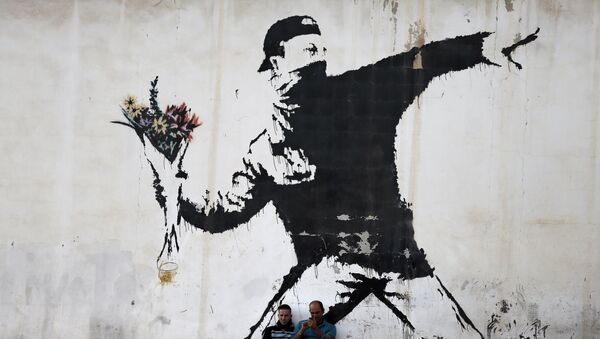 © AFP 2021 / Thomas Coex
Subscribe
Svetlana Ekimenko
All materialsWrite to the author
In 2014 elusive street artist Banksy applied for an EU trademark for one of his most famous works of art, depicting a masked protester throwing a bouquet of flowers, originally painted on a wall in Jerusalem in 2005 and since re-appropriated by UK card company Full Colour Black for use on greeting cards

A panel of judges from the European Union’s Intellectual Property Office (EUIPO) has ruled against elusive street artist Banksy in a trademark dispute which has lasted two years with the UK company Full Colour Black, that sells street art greeting cards, often using work by the anonymous artist.

The Flower Thrower, a mural Banksy painted on a wall in Jerusalem in 2005, had been appropriated by the card company without the permission of the reportedly England-based street artist.

“Banksy has chosen to remain anonymous and for the most part to paint graffiti on other people’s property without their permission, rather than to paint it on canvases or his own property,” the panel said in its decision, published by the EUIPO Cancellation Division.

Banksy’s anonymity had purportedly worked against him in the legal battle, as EUIPO added:

“It must be pointed out that another factor worthy of consideration is that he cannot be identified as the unquestionable owner of such works, as his identity is hidden.”

While invalidating the guerilla artist’s UK trademark for the flower-thrower image, the ruling may also set a precedent that may put all of his trademarks in jeopardy, as he cannot claim copyrights to his works while his identity remains a mystery.

Banksy, known for his satirical and politically-charged stencil graffiti, had applied for an EU trademark of the Flower Thrower in 2014, through his legal representatives, Pest Control Office, after the card company had started using the flower bomber image on its cards. However, the card company, Full Colour Black, initiated legal proceedings against Banksy and his team in the autumn of 2018.

“A greetings card company is contesting the trademark I hold to my art and attempting to take custody of my name so they can sell their fake Banksy merchandise legally,” Banksy said in a statement.

The card company’s case hinged on the claim that the anonymous artist did not intend to use the trademark he had taken out on the design in 2014.

Banksy had never concealed his disdain for intellectual property, claiming that “copyright is for losers”. Nevertheless, the artist responded by opening a shop called Gross Domestic Product, ostensibly seeking to demonstrate that he was using the trademarks on his work.

“Banksy has been forced into the merchandising market… The European trademark categories became his muse—you have a ludicrous court action being met by creative genius!” the artist’s lawyer Mark Stephens was cited by Artnet News as saying in 2019.

However, the move backfired, as in their ruling, the intellectual property judges called the shop “inconsistent with honest practices.”

“The use, which was only made after the initiation of the present proceedings, was identified as use to circumvent the requirements of trademark law and thus there was no intention to genuinely use the sign as a trademark,” wrote the panel.

“Banksy was trying to use the sign only to show that he had an intention of using the sign, but his own words and those of his legal representative unfortunately undermined this effort,” said the judges. 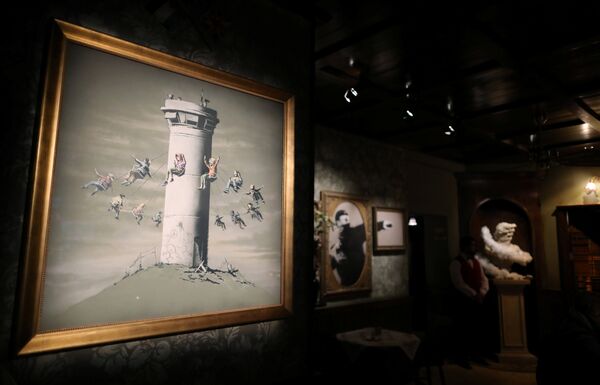 Works by street artist Banksy are displayed in the Walled Off hotel, which was opened by in the West Bank city of Bethlehem March 3, 2017.
© REUTERS / Ammar Awad

Attorney Aaron Wood, who represented Full Colour Black in the case, said the ruling could have serious repercussions for the artist’s other trademarks in the EU and the US.

“If there was no intention to use, then the mark is invalid, and there is also the question of fraud… In fact, all of Banksy’s trademarks are at risk as all of the portfolio has the same issue,” Wood said in an interview with World Trademark Review.

There has not been any official comment on the developments and the ruling from Banksy’s legal team. 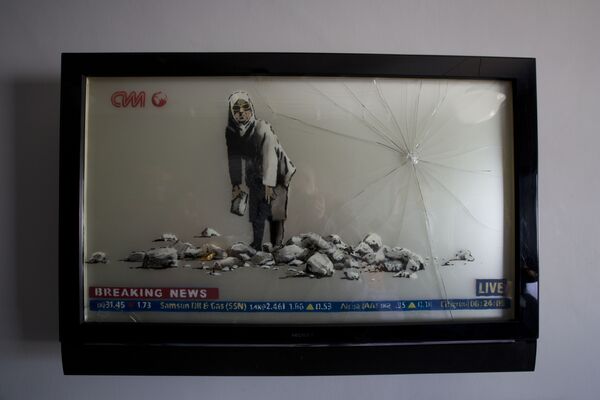 Banksy's work is displayed in the "The Walled Off Hotel" in the West Bank city of Bethlehem, Friday, March 3, 2017. The owner of a guest house packed with the elusive artist Banksy's work has opened the doors of his West Bank establishments to media, showcasing its unique "worst view in the world." The nine-room hotel named "The Walled Off Hotel" will officially open on March 11.
© AP Photo / Dusan Vranic

He began working in the 90’s in his reported home-town of Bristol, gaining fame and notoriety in the 2000’s.
Famously, after one of his pieces sold for $1.4 million at a Sotheby’s auction in 2018, it started to self-destruct, as a shredder had been installed at the bottom of the frame.