With US Election Just 'Around the Corner', Donald Trump is Accused of Sexually Assaulting a Model 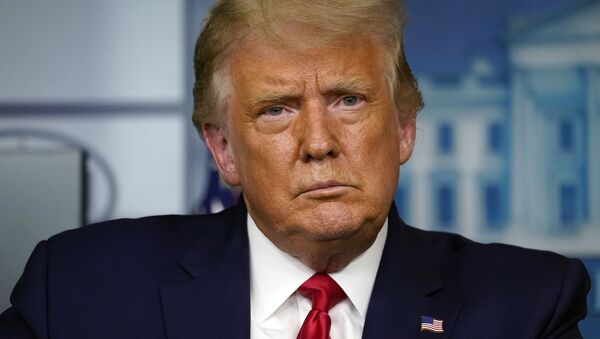 Former model Amy Dorris has accused US President Donald Trump of sexually assaulting her in his VIP box during the US Open tennis tournament back in 1997, the incident has left her feeling “sick” and “violated”, the woman told the Guardian in an exclusive.

Dorris, now 48, said she got introduced to the former businessman at his office in Trump Tower on 5 September 1997 by her then boyfriend, Jason Binn, a luxury fashion magazines magnate. The company next attended the US Open in Queens together, which they observed from Trump’s private box. However, as the aspiring actress was leaving the bathroom, she was allegedly closely approached by Trump, who was said to be waiting for her outside. The future president, who was then married to his second wife Marla Maples, grabbed the model strongly despite her vocal objections, Dorris claims.

“He just shoved his tongue down my throat and I was pushing him off. And then that’s when his grip became tighter and his hands were very gropey and all over my butt, my breasts, my back, everything”, she told the Guardian.

“I was in his grip, and I couldn’t get out of it,” she said, adding: “I don’t know what you call that when you’re sticking your tongue just down someone’s throat. But I pushed it out with my teeth. I was pushing it. And I think I might have hurt his tongue”, Dorris, who was 24 years old at the time, added.

The woman was indeed photographed next to Trump on the day when the alleged assault took place, and also a day after, when she and her ex-boyfriend returned to Trump’s box at the tournament. The couple also visited the billionaire’s apartment in Trump Tower on that day, where Dorris was pictured posing next to several celebrities alongside her new “friend” Donald Trump, including Lenny Kravitz, Leonardo DiCaprio and David Blaine.

The former model also told the Guardian that she, her former lover and Trump all attended a memorial service for Gianni Versace on 8 September 1997.

When asked by the outlet why she continued seeing her alleged offender, the mother-of-two said that she “had no money, nowhere to go” as she was from Florida and was hanging out in New York with her then-boyfriend.

“We were going from event to event and it was overwhelming,” Dorris explained, noting that “people spend years around people who have abused them, that’s what happens when something traumatic happens, you freeze.”

According to Trump’s lawyers cited by the outlet, POTUS strongly denied ever harassing Dorris or being inappropriate toward her in any way. The president’s legal team also expressed doubts over the woman’s story citing discrepancy in her account and pointing out to the fact that the former model voluntarily chose to spend time with her purported assaulter days after the incident, which she described as so disturbing.

The social media crowd was also hesitant about the woman’s account, which they said was really “timely”, bearing in mind the upcoming November poll.

“They always come out a month or two before the elections...” one person noted on Twitter.

Because election is around the corner .

Election around the corner pic.twitter.com/azMCc48l9d

I mean. It's most likely true. He even said he can't control himself when he sees a beautiful woman. He just grabs them by the pussy.

1. Why wait until now
2. How can it ever be proved

According to the Guardian, Dorris first shared her allegations in confidence last year but has decided to go public only now, less than two month before the November election, in a bid to become a role model to her teen daughters. The 48-year-old woman also said she was “tired of being quiet” and “sick of him [Trump] getting away with this”.

Back in October 2016, over a dozen women came forward accusing presidential contender Trump of sexually assaulting them in previous decades, something that was denied by the candidate’s team. Despite a number of allegations, the US president has never been charged with sexual offences.

Meanwhile, his Democratic presidential rival Joe Biden is also facing similar accusations from his former staffer Tara Reade, who has recently claimed that the ex-senator penetrated her with his fingers without her consent back in 1993 as they worked together at the Capitol. Biden has denied these claims, prompting Reade to file a criminal complaint against him.

000000
Popular comments
Trump likes to Assault the legal age and Biden likes the under age girls. you vote for any of the two you lose no matter what.
Chamroosh
17 September 2020, 16:34 GMT9
000000
At the age of above 70 years, Trump has sex on his dreams only and most possible Melania is starving