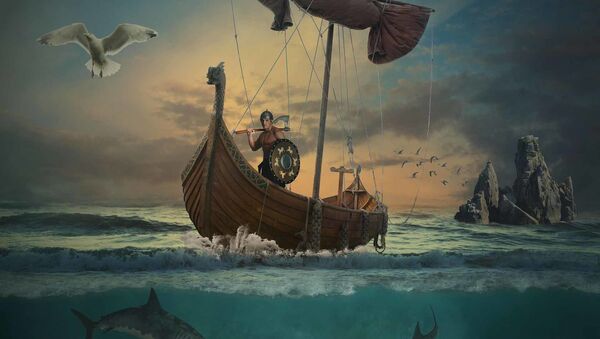 Igor Kuznetsov
All materials
According to a major Danish study, many Vikings had dark hair due to DNA from Southern Europe and Asia.

A major study by the University of Copenhagen has shed a new light on the history of the Viking Age, where the Vikings actually came from, and how they looked.

To reach its goal, the team of researchers led by Danish professor Eske Willerslev has studied samples of Viking Age bones from twelve different countries, extracted DNA and mapped the genes. A total of 442 skeletons have been studied.

Judging by the DNA, the researchers concluded that the Vikings actually had quite a lot of genes in common with southern Europeans, Eastern Europeans and even Asians. This means that it was more common for them to be dark-haired than light-haired during the Viking Age, contrary to the common stereotype of blonde Nordic warriors perpetuated by pop culture and cinema.

“Vikings were not genetically pure Scandinavians. From the end of the Iron Age and into the Viking Age, there is a large influx of DNA from Southern Europe and Asia. This also means that it was probably only a few of them who were fair-haired”, Eske Willerslev told Danish Radio.

By contrast, contemporary peasants' DNA had remained unchanged since the Neolithic due to lack of exposure. According to Eske Willerslev, the new results portray the Viking Age in a more realistic light.

“With this study, we establish that the Viking Age was very special. The Vikings travelled much farther, had lots of southern European genes and probably far greater cultural exchange with the outside world than the contemporary peasant communities”.

Willerslev contended that the the Vikings were “not a Scandinavian ethnic group”, but rather “a culture that you can convert to”, like Christianity or Islam today.

“Being a Viking was a culture that different people embraced. No matter where you came from,” Willerslev said, describing one of the skeletons that had no Scandinavian genes whatsoever. “He probably just identified himself as a Viking”, Willerslev explained.

According to Kasper Andersen, a historian at Moesgaard Museum who is an expert in the Viking ethnicity and identity, this fits well with written sources that cite numerous examples of people from other parts of Europe taking part in the Viking raids, including Anglo-Saxons and Franks.

Andersen stressed that the entrenched myths are a product of Danish 19th-century nationalism, which arose amid a number of bitter setbacks of the Danish Realm that included losing in the Napoleonic wars, national bankruptcy, the loss of Norway to Sweden and parts of Schleswig to Germany. In response, stories about mighty, blonde and uniquely Scandinavian Vikings who sailed out and conquered the world became increasingly popular.

“Many of the myths about the Vikings were invented in the 19th century, when nationalism arose, and we began to see ourselves as Danes. There, the blonde hair may have fitted in well. But based on the historical sources, we can not say anything certain about the Vikings' hair colour,” he said.

Eske Willerslev suggested that Danes could have become mostly fair-haired due to sexual selection and beauty ideals.

During the Viking Age (793-1,066), Norsemen known as Vikings undertook large-scale raids, conquests and trading throughout Europe, established settlements in Iceland, Ireland, the British Isles and Greenland, and even reached North America (they called Vinland).