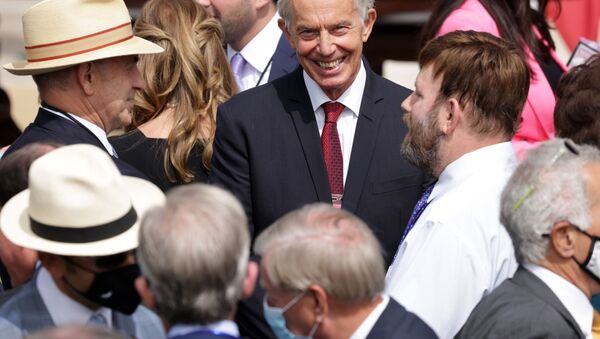 Asya Geydarova
Editor
All materialsWrite to the author
The US and Israel, as well as British officials, have praised the former British prime minister for playing a role in reaching the agreements between Israel and the UAE and Bahrain to normalise relations.

Tony Blair has faced backlash from analysts at home for brokering the Middle East agreements, which, according to them, will not bring peace to the region and could even escalate the tensions.

According to the Daily Mail newspaper, critics say that the agreements provides the US with an opportunity to sign arms deal with the UAE involving the sale of F-35 jets, which Israel previously opposed.

"Military spending in the Middle East has increased a lot over recent years, and there is a risk it will intensify ongoing arms races in the region", said Andrew Smith from the Campaign Against Arms Trade.

Chris Doyle from the Council for Arab-British Understanding said the UAE and Bahrain only signed the agreements because they "see Iran as the greatest threat" and because of that could "throw Palestine under the bus".

Meanwhile, the deal received praise from the political elite in Washington and London. Foreign Secretary Dominic Raab hailed the agreements, expressing hopes that other Arab nations would follow the UAE and Bahrain. Republican pollster Frank Luntz even called Blair a "rockstar" for brokering the deal.

"Tony Blair was a rockstar at this event. People were lining up for photos with him", he tweeted.

On signing the agreements, US President Donald Trump called it the "dawn of a new Middle East". "We're here this afternoon to change the course of history", he added.

In accordance with Tuesday agreements, the UAE and Bahrain agreed to establish diplomatic and economic relations with Israel. Commenting on the accords, Blair said he hopes Palestinians "will understand that it is only by radically changing strategy that the legitimate aspirations for a viable Palestinian state can be realised".

The agreements, however, were slammed by the Palestinian authorities, while Iranian officials called them a "betrayal of the Palestinian cause" and only beneficial for one party.

The UAE and Bahrain became the third and the fourth Arab states to recognise Israel, after Egypt and Jordan did so. Historically, Arab League states have refused to engage in diplomatic relations with Israel, insisting that reconciliation could only be possible if it restores the border with Palestine to what it was before the Six-Day War.

Israel, so far, refuses to recognise Palestine as an independent state.

000000
Popular comments
WMD Tony B-liar a war criminal responsible for 100,000's deaths as a result of the war in Iraq. This destabilizing effort came about on the orders of his puppet master Israhell. Now he is helping them again.
astrodetective
17 September 2020, 07:36 GMT4
000000
As Henry II said. "Will no one rid me of this meddlesome priest?"