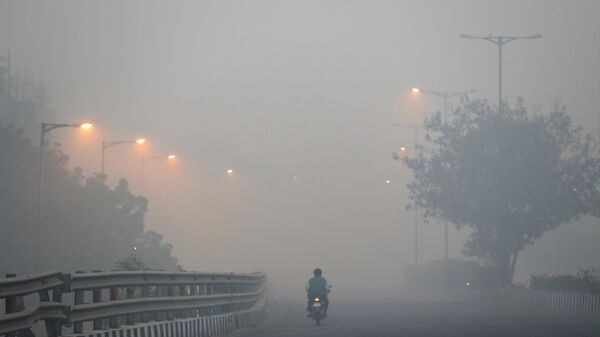 Radhika Parashar
All materialsWrite to the author
In the last two months, the world’s biggest COVID-19-induced lockdown, executed by the Indian government, has been relaxed to some extent. As more and more people have begun flocking the roads of India's cities, including the capital Delhi, the days of “good air quality” amid the lockdown seem to be drawing to a close.

In September, Delhi, which had been plagued by air pollution and smog for several years, recorded “moderate” air quality days, with the Air Quality Index (AQI) fluctuating between 100-200. This has emerged as a matter of concern for environmental experts, who have noted that until around August, the air quality was “good”.

“Rain has stopped. Wind speed has reduced. The accumulation of particles in the atmosphere is building up. There are possibly more vehicles (on the road) as services get unlocked. Suspended dust will start increasing as we approach winter,” the Hindustan Times quoted Sachin D. Ghude, a scientist at the Indian Institute of Tropical Meteorology who is also associated with Delhi’s early air quality warning system under the Earth Sciences Ministry as saying on Wednesday.

@DcClz @LtGovDelhi @CPCB_OFFICIAL @dtptraffic @suraiya95 see the traffic scenario at Pul mithai sadar bazar delhi 6, no traffic personal wrong side is the right side here. Massive jam leading to huge pollution. Hawkers occupying half of the road. Plz for god sake do something. pic.twitter.com/x1l3enOcfP

​The news comes just months before the the Hindu festival season; during Diwali, the festival of lights, fireworks play a major role in the celebration.

#EarthDay: It Took Shutting Down Everything to Get Blue Skies Again - Indian Environmentalist
Choking and blinding smog usually covers several parts of India, especially Delhi after the Diwali celebrations.

Some weeks into the lockdown that was imposed late in March, social media platforms in India had started flooding with astounding pictures of magnificent blue clouds, lush green trees and exponentially increased visibility escorted by the restrictions on traveling and working of smoke-producing factories.

In May, Delhi’s overall AQI dropped to 77, making the air easier to breathe amid the respiratory illness pandemic.

Himalayan view from Jalandhar Punjab 200KM far due to zero pollution it is Now Visible. pic.twitter.com/q3Bac0qXHd

Seeing is believing!
This is our Yamuna in Delhi - clean, reflecting the clouds & peaceful.

Let’s make sure we maintain air quality & the cleanliness of our rivers even after this pandemic is over. 🙏🏼 #EverydayIsEnvironmentDay pic.twitter.com/rexsjoLwrX

Images taken Pre and Post Lockdown at the Iconic India Gate War Memorial in New Delhi. The Environment appears to be a beneficiary of this awful Virus. pic.twitter.com/ZnVIINEWtE

​Now that the government has eased lockdown restrictions in a bid to stabilise the economy, a clear difference in the atmosphere is visible in pictures and videos showing traffic jams and smog hovering over the city. Netizens have also observed the changes and expressed their views on social media.

a daily routine for heavy traffic jam starting from nangloi to mundka.right now its a 27 minute jam showing in google.request delhi traffic police and delhi road development to look after this matter.lot of fuel wastage and heavy pollution . pic.twitter.com/0yBG30rOqE

​Earlier this week, Delhi Environment Minister Gopal Rai held a crucial meeting with senior officials to discuss ways to deal with the extreme levels of pollution in the city during late autumn and the winter months, particularly following Diwali.