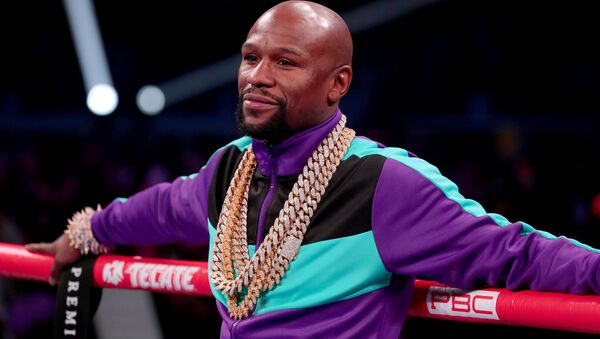 Aleksandra Serebriakova
Moscow-based Sputnik correspondent specializing in foreign affairs.
All materialsWrite to the author
Back in November 2019, YouTube star and amateur boxer Logan Paul challenged undefeated boxing legend Floyd Mayweather to a fight. It seems that his call has been heard.

Without official confirmation from both sides, it seems that an exhibition fight between Logan Paul and professional boxer Floyd Mayweather is happening, following numerous reports in the media and comments from fellow YouTubers.

​Last week, "The Fighting News” reporter Mike Feinberg revealed that he had personally seen an image of a contract detailing match between Mayweather and Logan signed by the three-time winner of the BWAA Fighter of the Year award.

“In the boxing world, Floyd Mayweather Jr. is coming out of retirement and has just officially signed a contract to fight an exhibition match against Logan Paul. YouTube sensation Logan Paul. I don't understand the fight,” Feinberg argued. “He’s going to be fighting one of the best in Floyd Mayweather. It's going to be a joke of a fight. But it's signed, it's official. I heard it from a reputable source today and even saw a picture of the signed contract where Floyd signed on the dotted line for this exhibition match.”

The journalist suggested that Mayweather, who officially handed in his boxing gloves in 2015, apart from his one-time comeback in 2017, was mainly lured to the fight by “some kind of money” as the match will apparently be broadcast to YouTube and “Logan Paul's got a lot of followers”.

The news was also confirmed by YouTuber Keemstar who said that it was “no joke”, citing a “boxing insider” in the industry, and by American professional boxer Ryan Garcia who literally sent out his “prayers” for Logan Paul, a boxing enthusiast who fought professionally only once – and lost. Unlike his apparent opponent, who has never lost a fight throughout his nearly 20-year-long career.

Mayweather vs Logan Paul this year!

As the news hit the internet, many joked that the fight was a “cry for help” from the 25-year-old YouTuber, as it was now apparently time to prepare for the “funeral” (hopefully, just of Logan’s boxing career).

Where are Logan’s friends? This is a literal cry for help! Is he okay? Logan we forgive you for Japan, you don’t need to do this.

This is equivalent to Floyd fighting a guy off the street. At least Conor was a seasoned professional fighter. If Floyd is serious, this fool wouldn’t land a pinch. I’ll wait for replays, would not order this crap. Floyd really has no shame 😆

I can see this being a pretty quick fight 😂

Imagine coming out of retirement just to fight Logan Paul...

Welp. Now would be a good time to prepare Logan’s funeral