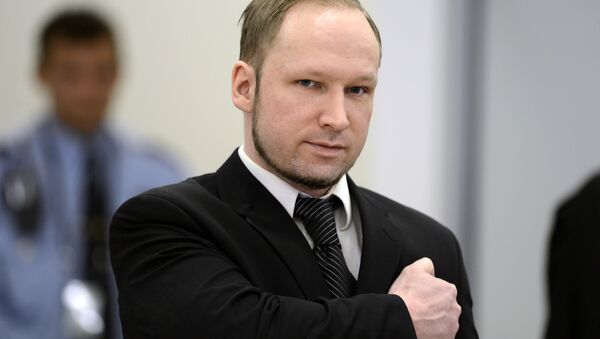 © Sputnik
Subscribe
Igor Kuznetsov
All materials
While serving his sentence, mass killer Anders Breivik, the man behind the bloodiest killing spree in the history of modern Norway, expressed remorse over his deeds and voiced a desire to leave the extremist environment. However, many dismissed his “remorse” as mere manipulation.

Convicted Norwegian terrorist and mass killer Anders Behring Breivik, who is serving a 21-year sentence for killing 77 people on 22 July 2011, has submitted a request for parole through his lawyer.

“He wants this now. He has been in solitary confinement for over eight years since the trial was over,” Breivik's lawyer Øystein Storrvik told the newspaper Verdens Gang. “He is entitled to a judicial review of parole at a minimum time of ten years in his case. This is a right that all convicts have and which he wants to exercise,” Storrvik added.

According to Storrvik, there will be a court hearing on whether Breivik is to be released.

“The legal question is whether the conditions for him to continue to be held in custody have been met,” Storrvik said.

Lawyer Storrvik also stressed that they are planning a new lawsuit against the state about Breivik’s conditions of imprisonment.

In 2015, Breivik already sued the state for “human rights violations”. His complaints were initially partially upheld by the Oslo District Court, but the the Court of Appeal later ruled no violations had occurred.

“We plan to follow up the petition with a new lawsuit about the durability of such a long isolation under the European Convention on Human Rights. His prison conditions have not been significantly improved since this was last dealt with by the courts. The so-called compensatory measures are not sufficient to be able to make such long-term isolation legally sustainable,” Storrvik said.

In July 2011, whe disguised as a police officer, Breivik tracked and gunned down 69 people, most of them teenagers at a Labour Party youth camp on the island of Utøya, after killing eight people in a bombing in Oslo's government quarter the very same day. In 2012 he was jailed to 21 years in prison, Norway's harshest sentence.

In Skien prison, Breivik has three cells, each measuring 10 square metres with outdoor views, plus he is allowed to exercise, play video games and watch television. However, his sentence can be extended indefinitely. So far, Breivik has spent his time in maximum confinement and has never had contact with other inmates. Previously, Breivik's sentence was reported to cost Norwegian society NOK 5.2 million annually ($580,000).

Since his incarceration, Breivik has expressed remorse over his deeds and voiced a desire to leave what he described as “fascist, national socialist and ethno-nationalist ideology and movement”. However, psychologists doubted the authenticity of his sentiment and suggested this may be an attempt at manipulation.

Breivik has often been compared to Norwegian musician and writer Varg Vikernes, the man behind Burzum, one of the most influential black metal acts. Vikernes, who was convicted of murder and church arson, was handed amaximum prison sentence as well and was long seen as public enemy number one. He ended up serving 15 years in prison and was released on parole. After his release, he moved to France with his wife and children, where he continued to write and make music.

000000
Popular comments
His words may be manipulation or they may be honest. When a legal system insists you behave in a certain way to get parole do not be surprised if people behave that way.
ian
17 September 2020, 15:21 GMT1
000000
Another gun control false flag aka Sandy Hoax. According to Police it would have been impossible for Brevik to move from position A to position B for 2 sets of 'shootings,' in the alleged time frame.. unless he used the power of his mind to instantly teleport... as did a group of Timmer brain doctors, who traveled without a craft, from the Twin Dal Universe to Planet Erra, Sun Taygeta, (Pleiades). And this even into a different time frame(!), to repair the damaged brain of the Planet's head honcho's daughter. This surprised the hosts, who are 8,500 years ahead of us in tech, meds., Spiritual knowledge/power.. Data from The Pleiadian Mission by R Winters, based on talks with Swiss et contacter Meier of theyfly dot com.
TommyT
17 September 2020, 11:06 GMT
000000
Newsfeed
0
New firstOld first
loader
LIVE
Заголовок открываемого материала
Access to the chat has been blocked for violating the rules . You will be able to participate again through:∞. If you do not agree with the blocking, please use the feedback form
The discussion is closed. You can participate in the discussion within 24 hours after the publication of the article.
To participate in the discussion
log in or register
loader
Chats
Заголовок открываемого материала
Worldwide
InternationalEnglishEnglishMundoEspañolSpanish
Europe
DeutschlandDeutschGermanFranceFrançaisFrenchΕλλάδαΕλληνικάGreekItaliaItalianoItalianČeská republikaČeštinaCzechPolskaPolskiPolishСрбиjаСрпскиSerbianLatvijaLatviešuLatvianLietuvaLietuviųLithuanianMoldovaMoldoveneascăMoldavianБеларусьБеларускiBelarusian
Transcaucasia
ԱրմենիաՀայերենArmenianАҧсныАҧсышәалаAbkhazХуссар ИрыстонИронауОssetianსაქართველოქართულიGeorgianAzərbaycanАzərbaycancaAzerbaijani
Middle East
Sputnik عربيArabicArabicTürkiyeTürkçeTurkishSputnik ایرانPersianPersianSputnik افغانستانDariDari
Central Asia
ҚазақстанҚазақ тіліKazakhКыргызстанКыргызчаKyrgyzOʻzbekistonЎзбекчаUzbekТоҷикистонТоҷикӣTajik
East & Southeast Asia
Việt NamTiếng ViệtVietnamese日本日本語Japanese俄罗斯卫星通讯社中文（简体）Chinese (simplified)俄罗斯卫星通讯社中文（繁体）Chinese (traditional)
South America
BrasilPortuguêsPortuguese
NewsfeedBreaking
08:21 GMTIndia’s Main Opposition Party Takes a Dig at Grand Celebration on PM Modi’s Return From US
08:11 GMTPolling Places Open for Parliamentary Elections in Germany
08:00 GMTEximbank Will Support Russian Exports to Croatia
07:45 GMTUS Treasury Could Run Out of Cash by Mid-October, Think Tank Warns as Government Shutdown Looms
07:31 GMTGloves Off: Prince Andrew Takes New Legal Strategy, Aims to Fight Sex Abuse Allegations, Media Says
07:10 GMTMan Arrested on Suspicion of Murder of London Teacher Sabina Nessa
07:06 GMTExplosion in Southwestern Pakistan Kills Four Soldiers, Two Injured, Reports Suggest
06:55 GMTMan Utd's Solskjaer Claims Villa’s Winning Goal Was Clearly Offside
06:39 GMTTen People Missing After Landslide in Southwestern China, Reports Suggest
06:14 GMTJapan May Lift State of Emergency by End of September
05:47 GMTBoris Johnson 'Backing Construction of Fleet of Mini Nuclear Reactors' as UK Gripped by Fuel Crisis
05:43 GMTRussia's Only Active Female Cosmonaut Could Set New Record For Duration of Space Stay
05:29 GMT'Are They Paid Actors?' Ex-UK Health Secretary Mocked for 'Comeback Video' in His Constituency
04:30 GMTGoing Scuba Diving: Adorable Golden Retriever Pup Sleeps in Water Bowl
04:00 GMTNewsom: California to Nix the Word 'Alien' From State Laws on Immigration
03:45 GMTMexican Soldiers Detained by Border Patrol Near Puente Libre - Authorities
03:35 GMTUN Secretary General Holds Talks With Foreign Ministers of Armenia, Azerbaijan
03:25 GMT'Country Has Gone to Hell': Trump Urges US Voters to Back 'America First' GOP Ahead of 2024 Election
03:18 GMTRussia Has ‘Thoughtful Optimism’ on Possibility of Restoring Iran Nuclear Deal - Lavrov
03:01 GMTMcConnell Refuses to Rule Out GOP Blockade of a Biden SCOTUS Nominee