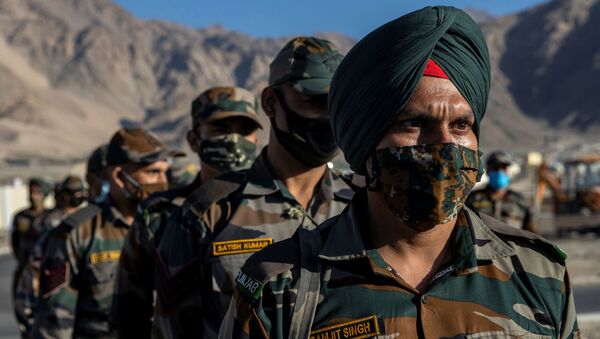 © REUTERS / DANISH SIDDIQUI
Subscribe
Nair N.B.
Sputnik correspondent
All materialsWrite to the author
Indian Defence Minister Rajnath Singh on Tuesday acknowledged that the lack of a 'mutually acceptable solution' with China is the reason for simmering border tensions in Ladakh. The two countries have held talks at various levels in the wake of a deadly faceoff in mid-June, but the dispute remains unresolved.

Defence Minister Rajnath Singh cautioned that "no force on Earth could stop Indian forces from patrolling the country's border," adding that soldiers had sacrificed their lives (in Ladakh) to "maintain the sanctity of our border".

Singh was responding to the lawmakers of Rajya Sabha, the upper house of India's Parliament, on a brief discussion on the faceoff with China in eastern Ladakh since June.

In his statement earlier, Rajnath Singh said that New Delhi has conveyed to Beijing that any attempt to “unilaterally alter the status quo was unacceptable”. 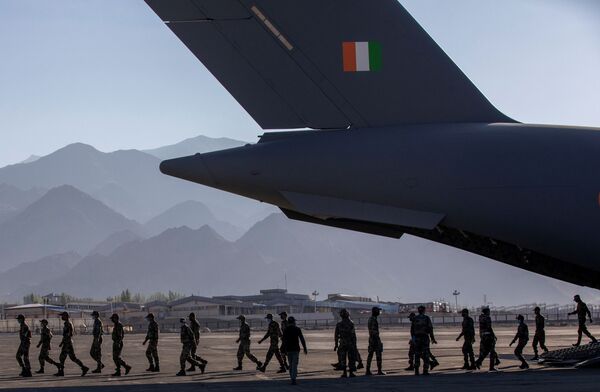 Indian soldiers disembark from a military transport plane at a forward airbase in Leh, in the Ladakh region, September 15, 2020
© REUTERS / DANISH SIDDIQUI

The minister maintained India wants to resolve the current situation through dialogue and had diplomatic and military engagements with China, but they again resorted to provocative military manoeuvres overnight on 29-30 August in an attempt to change the status quo on the South Bank area of Pangong Lake.

“While no one should doubt our determination to safeguard our borders, India believes that mutual respect and mutual sensitivity are the basis for peaceful relations with neighbours,” asserted Rajnath Singh.

The chairman of the Rajya Sabha and Vice President M. Venkaiah Naidu asked the government to take leaders of all political parties into confidence on the issue of the border standoff with China.

The statement comes against the backdrop of the reports that China has intruded about 8 km on the north bank of Pangong Lake and Indian troops have been restricted from patrolling beyond Finger 4 since April. Traditionally, India used to patrol up to Finger 8 where it claims the LAC is. However, China lays claim up to Finger 4.

The spurs of the mountain range on the northern bank of Pangong Lake jut out towards the lake like a palm, with the protrusions looking like fingers. They are demarcated on the maps as 'Fingers'.

Former Defence Minister A.K. Antony wanted India should take action to restore the status quo in Ladakh as it existed before the faceoff.

Meanwhile, the Chinese foreign ministry claimed that the People's Liberation Army's frontline troops have been observing the agreements reached between the two sides on 11 September.

"It is imperative for India to immediately correct its mistakes, realise disengagement on the ground and take concrete action to ease up tensions in the relevant areas," the Chinese Foreign Ministry said on Thursday.

Nuclear-powered India and China share a 3,500-kilometre (2,175-mile) border, known as the LAC. It stretches from the Ladakh region in the north to the Indian state of Sikkim. In eastern Ladakh, it passes through a lake in the Pangong Lake area.

India controls the western portion of the 45-km long lake, while the rest (about 119-km) is under Chinese control. Most of the clashes between the two countries have taken place in the Galwan Valley, Ladakh.

000000
Popular comments
As long as the Indians just bark ...
Western Glasnost
17 September 2020, 15:08 GMT
000000
Ladack is part of china and Tibet and it was on ancient trade route between Xinjiang and Tibet trading was common until india invaded in the late 18 century , read and England the trouble makers agree with the lord of india, this is why the evil hindu feels brave. But they are so stupid in not realizing that if side with UK again they will be recolonized. With british bases again on their territory for protection disguise.