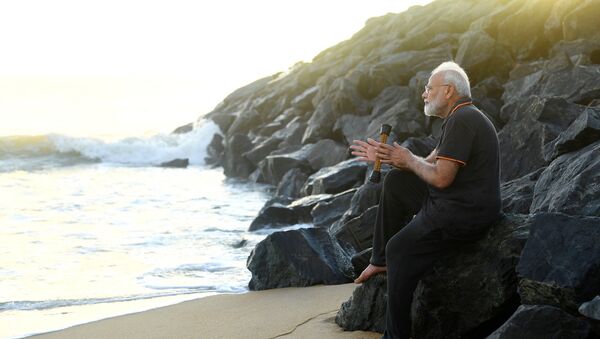 Shweta Sharma
Sputnik correspondent
All materialsWrite to the author
Indian Prime Minister Narendra Modi is celebrating his 70th birthday on Thursday. While the world leaders and his admirers in India and abroad are celebrating the day by sending their warm wishes to him, many are using the occasion to call out his government for failing to keep Indians employed amid the pandemic.

A number of enraged people in India are observing 17 September as National Unemployment Day with the hashtag currently trending on Twitter alongside #NarendraModiBirthday.

The virtual campaign to protest against high unemployment rates in India gained momentum after Congress leader Rahul Gandhi, a sharp critic of Modi, called on his countrymen observe ‘National Unemployment Day’ on Thursday.

Massive unemployment has forced the youth to call today #NationalUnemploymentDay.
Employment is dignity.
For how long will the Govt deny it? pic.twitter.com/FC2mQAW3oJ

The majority of the young population in India slammed the government for record-high unemployment and its recent decision to allow exams amid the pandemic.

The national career service portal under the Ministry of Labour and Employment revealed that around 10 million youth have registered themselves on the website as of 31 August, while only 177,000 jobs are available.

Nearly 21 million Indians lost their jobs between April and August in the wake of the economic slump due to restrictions on trade and business activities, revealed data provided by the Centre for Monitoring the Indian Economy (CMIE).

The hashtag is trending with 1.85 million mentions and counting.

Happy b'day to the person who said to bring golden days for us nd finally brought us to this stage where we are begging of to fullfill our basic requirements#NationalUnemploymentDay#राष्ट्रीय_बेरोजगारी_दिवस@narendramodi @Aamitabh2 https://t.co/AjEGjVv5Nh pic.twitter.com/cjd2zTaGiF

The best ever salesman of Govt. Companies.

On the economic front, India reported a historic 23.9 percent contraction in  GDP for the months of April – June, the first quarter of the current financial year (April 2020 – March 2021).

The majority of the youth also turned against the Modi government for its decision to conduct undergraduate exams for medical and engineering students despite a vehement backlash over the decision from students and political parties. The exams were conducted across India on 1 September.

At least four students have committed suicide over fears of failing the career-defining exams due to the absence of coaching amid the lockdown and pandemic.

These students have launched the online tirade ever since by writing "Berozgaar" (Unemployed) as a prefix on their twitter handles.

#NationalUnemploymentDay
Employment is our right and we will fight. On this National Unemployment Day everyone ask where are 2 crore job? Dream of 5 trillion economy? @KailashOnline @amitmalviya @swapan55 @DilipGhoshBJP @BJP4Bengal @SuPriyoBabul pic.twitter.com/AxyOLmx9Cv

​In Rajasthan, a huge number of students thronged the streets and sold tea as a mark of protest signifying how they have no options left but to become tea vendors. The gesture was also an attempt to mock Modi, who claims that he is the son of a tea vendor and that he himself often accompanied his father on the job and sold tea.

Employment is our right and we will fight. On this National Unemployment Day everyone ask where are 2 crore job? Dream of 5 trillion economy? #জাতীয়_বেকারত্ব_দিবস#NationalUnemploymentDay @KailashOnline @amitmalviya @swapan55 @DilipGhoshBJP @BJP4Bengal @SuPriyoBabul pic.twitter.com/sql4qtcKUX