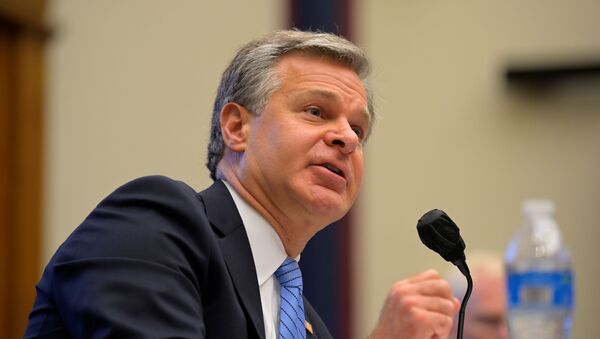 Asya Geydarova
Editor
All materialsWrite to the author
Conservative lawmakers said that Wray was carelessly diminishing the role of Antifa, which, according to them, has an organised structure and coordinates its work on all three levels - local, regional, and federal.

FBI Director Christopher Wray has received backlash from Republicans in the House concerning his comments on Antifa activists that have been extremely active in the ongoing anti-police protests across the United States.

Wray said on Thursday that the FBI has "quite a number" of investigations into what they could call "violent anarchist extremists", of whom some individuals "self-identify with Antifa", but the agency does not consider it a group or an organisation.

"Antifa is a real thing. It's not a group or an organisation. It's a movement or an ideology, maybe one way of thinking of it", Wray said at the House Homeland Security Committee on Thursday.

Commenting on his words, Rep Dan Crenshaw considered Wray to be "downplaying" the role of the group. In contrast, he said it is an "ideology that organises locally", and coordinates its activity across the country, stressing that Antifa has its own "uniform" and collects funds to help it survive and engage in violence.

"This is an ideology that has trained its members, makes shield wall phalanxes to attack federal officers, formed an autonomous zone in an American city and besieged a federal courthouse in another. So, I mean, it just seems to be more than an ideology", Crenshaw concluded.

Rep Jeff Van Drew said that there is "some authority" within Antifa and he has no doubt that it is organised. He said that Antifa can reach out to different states, counties, and cities, and organises at the same time when the Black Lives Matter movement is protesting, and supports its followers.

"In my mind, there is Antifa, there is a group — a group or individuals that control Antifa and have some authority over it. And it is to some degree, without question, organised", the lawmaker said.

The Trump administration and Republicans have repeatedly accused Antifa, and allied groups, of inciting violence during the protests and criticised Democrats for not condemning its campaign in Democrat-run areas. Republicans say that Democrats have avoided denouncing Antifa only to get additional points ahead of the November election.

President Donald Trump slammed Antifa at the start of the US protests, pledging to designate them as a terrorist group. "The mission of Antifa is to spread terror in the US population with a goal of getting Americans to give up to their agenda", the president said earlier today.