Coming In From The Cold: Gareth Bale's Monster Wages Only Obstacle To Dream Move Back To Spurs 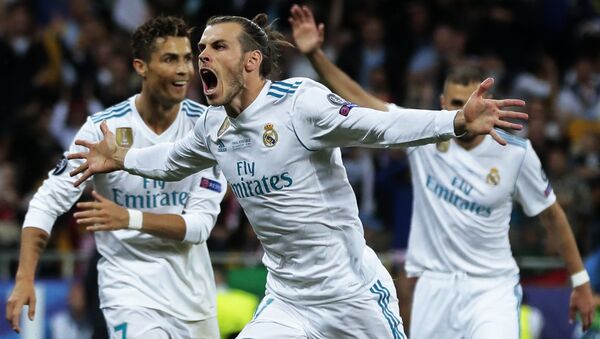 © Sputnik / Denis Tyrin
/
Go to the photo bank
Subscribe
Chris Summers
All materialsWrite to the author
Gareth Bale won the Premier League Players' Player of the Year award twice during his time at Tottenham Hotspur. He then joined Real Madrid for a then world record £85 million but he was frozen out by manager Zinedine Zidane last season.

Gareth Bale’s agent says he is "close" to sealing a move back to Tottenham Hotspur from Real Madrid with the main obstacle being who will pay his astonishing wages of £600,000 per week.

The Welsh international midfielder has spent seven years with the Spanish giants and helped them win four Champions’ League finals between 2014 and 2018.

Gareth Bale is waiting in Madrid for green light to fly to London on his private jet to sign for Spurs. Wants to come home to Spurs. Lawyers drawing up contracts. Progress slow but all parties confident deal will be agreed. Will take Bale month to be fully fit & back to his best

​In 2016 Bale signed a new contract which almost doubled his wages and kept  him at the Bernabeu until 2022 but his persistent injury problems annoyed Zidane, who decided he had no future at the club.

In July 2019 Bale was all set to join Jiangsu Suning in China and Zidane was quoted as saying his departure would be "best for everyone" but Real Madrid’s owner Florentino Perez pulled the plug at the last moment.

Thank. You. For. Everything.

Now Jose Mourinho, a former manager of Real Madrid, has decided to bring him back to Tottenham and believes he can reignite a faltering team which made it to the Champions’ League final in 2019 but has failed to recapture that form despite having quality players like England striker Harry Kane and France’s World Cup winning goalkeeper Hugo Lloris.

I understand Spurs hope to announce deals for both Gareth Bale and Sergio Reguilon tomorrow. Both players have had their MRI checks and completed most of their medicals in Spain. On the loan deal for Bale, it's closer to a 60/40 split on his wages with Spurs picking up the 40.

​Mourinho told a press conference on Wednesday, 16 September: "I tried to sign him during my time at Real Madrid and the president followed my instinct and knowledge and the season I left, he brought Gareth to the club. That's no secret and Gareth knows that."

Barnett told the AFP news agency on Wednesday: "It's close but not done. It's a complicated deal."

Something sticks in the throat about Tottenham reportedly being so prepared to fund half of Gareth Bale's £600,000 weekly wage when it took so long - and so much pressure - for them to reverse the decision to furlough staff to avoid paying them the extra 20% of their wages.

​Real Madrid - desperate to get Bale off their wages bill - are pushing for a permanent transfer but Spurs, no doubt worried about the player’s reputation for injuries, would prefer a loan move and want the Spanish club to pay a portion of his wages.

Former Spurs boss Harry Redknapp told BBC Radio Wales: "It would be great for Gareth to get back playing again. He's such a talent, such a great player. It's a waste to see him not playing."

Tottenham also want to sign Real Madrid left-back Sergio Reguilon, 23, who was sent out on loan to Sevilla last season and helped them win the Europa League.

Real Madrid reportedly want to insert a buy-back clause allowing them to bring Reguilon from Spurs in the next two years.