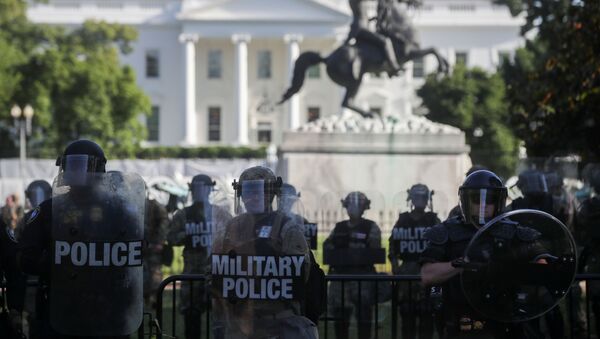 Morgan Artyukhina
All materialsWrite to the author
According to recently released testimony, US military police tried to obtain a slew of weapons from local national guardsmen as they prepared to assault peaceful protesters outside the White House on June 1, including a “heat ray” that induces the feeling of boiling skin.

As police in Washington, DC, moved to disperse peaceful protesters in Lafayette Park on June 1 prior to a photo op outside a church by US President Donald Trump, they unleashed a slew of weapons including tear gas, “stinger” grenades and rubber bullets. However, according to recently released testimony by Maj. Adam DeMarco of the DC National Guard, military police sought some even more powerful weapons, including the Active Denial System (ADS), or so-called “heat ray.”

The revelation comes from DeMarco’s July testimony to the House Natural Resources Committee, which is investigating the Lafayette Park incident. The testimony was obtained by the Washington Post on Wednesday.

According to the Post, an email from the National Capital Region’s lead military police official said the ADS “can provide our troops a capacity they currently do not have, the ability to reach out and engage potential adversaries at distances well beyond small arms range, and in a safe, effective, and nonlethal manner.” 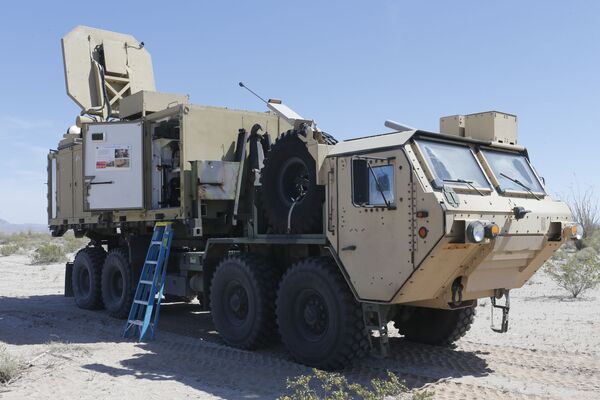 DeMarco’s testimony also revealed that a stockpile of M4 carbines - special assault rifles adapted from the M16 for use by special forces - was shipped from Virginia’s Fort Belvoir to the DC Armory on June 1, followed by roughly 7,000 rounds of 5.56-millimeter and 7.62-millimeter ammunition.

The dispersal was the beginning of a night of violent crackdowns on demonstrations across the US’ capital city in which police cornered dozens of protesters in a narrow side-street and tear-gassed them and national guardsmen “buzzed” protesters with helicopters by flying just 50 feet over their heads. The protests were part of a crescendo of nationwide demonstrations against racism and police violence sparked by the death of George Floyd, a 46-year-old Black man, at the hands of Minnesota’s Minneapolis Police Department.

According to the Pentagon’s non-lethal weapons program, the ADS broadcasts “a very short duration focused beam of millimeter waves at a frequency of 95 gigahertz” that “provides a quick and reversible skin surface heating sensation that does not penetrate into the target.” This is much more powerful than a microwave oven, but according to the Pentagon, “the associated directed energy wavelength is very short and only physically capable of reaching a skin depth of about 1/64 of an inch.”

“This weapon is battlefield technology,” the Partnership for Civil Justice Fund, a constitutional rights nonprofit group in Washington, DC, tweeted on Wednesday. “Deployed in Afghanistan but withdrawn. But clearly some in the Pentagon and the Trump Admin view Americans engaged in protest the way they view enemy combatants.”

DeMarco told lawmakers that in addition to the “heat ray,” military police also wanted a Long Range Acoustic Device (LRAD) “sound cannon,” which blasts eardrum-snapping sound waves at crowds within a narrow angle of attack. The National Guard had neither weapon, but if it had brought them into the city, it would have been a severe escalation, as the guardsmen deployed to DC streets in early June were unarmed.

The ADS has been a controversial weapon since it was first introduced in 2001, and it has been repeatedly blocked from use. After the 2003 US invasion of Iraq, US forces tried to get ahold of the weapon but were denied it, as the system was seen as “a recipe for disaster,” Franz Gayl, the Marine Corps's science and technology adviser, told Scientific American for a 2012 article. Similar attempts to get the “heat ray” for use in US prisons in 2010 were rebuffed, and when it was shipped to Afghanistan that same year, it was quickly recalled.

US Customs and Border Protection also sought an ADS device for use at the US-Mexico border in 2018 at the direction of US President Donald Trump, but the request was blocked by then-Secretary of Homeland Security Kirstjen Nielsen, according to a report published just last month by the New York Times.

Journalist Spencer Ackerman volunteered to be blasted with an ADS for a 2012 article in Wired. He described the sensation as like standing in front of a blast furnace, even though he was 700 yards away from the truck on which the “heat ray” was mounted.

“When the signal goes out over radio to shoot me, there's no warning – no flash, no smell, no sound, no round. Suddenly my chest and neck feel like they've been exposed to a blast furnace, with a sting thrown in for good measure. I'm getting blasted with 12 joules of energy per square centimeter, in a fairly concentrated blast diameter. I last maybe two seconds of curiosity before my body takes the controls and yanks me out of the way of the beam. I'm feeling the heat for a good 10 seconds afterward,” Ackerman wrote.

000000
Popular comments
The real question is why are weapons such as these in the hands of the National Guard.

TruePatriot
18 September 2020, 01:34 GMT2
000000
Heat ray sounds alien , the police , instead should drop nuclear bombs , at the very least , use cluster bombs which will pass on the virus to the protesters . And Trump won't be disturbed reading his Bible wearing ear muffs and mask .