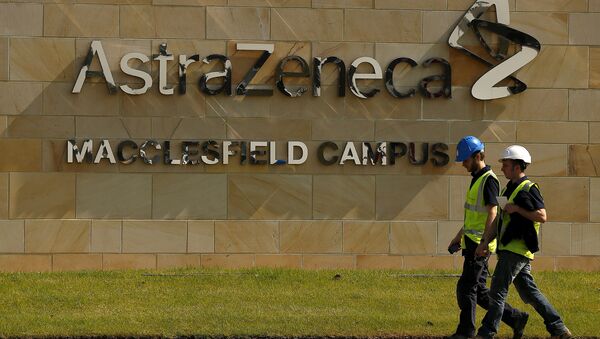 © REUTERS / Phil Noble/File Photo
Subscribe
International
India
Africa
Andrei Dergalin
All materialsWrite to the author
The US NIH reportedly has yet to obtain the patient's blood and tissue samples, and their investigation into the matter is currently "in the planning stages".

The US National Institutes of Health have launched an investigation into the case of a participant of a coronavirus vaccine trial run by pharmaceutical company AstraZeneca suffering spinal cord damage, Kaiser Health News reports.

According to the media outlet, while the US Food and Drug Administration ponders whether to “follow British regulators” in resuming the trial, which was halted due to the aforementioned incident, Dr. Avindra Nath, intramural clinical director and a leader of viral research at the National Institute for Neurological Disorders and Stroke, an NIH division, has revealed that “the highest levels of the NIH are very concerned”.

"Everyone's hopes are on a vaccine, and if you have a major complication the whole thing could get derailed," Nath remarked.

While AstraZeneca didn't confirm whether the patient in question was afflicted with transverse myelitis, Dr. Nath and "another neurologist" reportedly "understood this to be the case", with the media outlet pointing out that said condition "produces a set of symptoms involving inflammation along the spinal cord that can cause pain, muscle weakness and paralysis".

"We would like to see how we can help, but the lack of information makes it difficult to do so", he said, having noted that AstraZeneca needs to be "more forthcoming with a potential complication of a vaccine which will eventually be given to millions of people".

Dr. Nath also reportedly mentioned that the NIH has yet to obtain blood or tissue samples from the patient, and that the agency's investigation is currently “in the planning stages”.

While the UK's Medicines and Healthcare Products Regulatory has already reviewed the case in question and allowed the trials to resume in the United Kingdom, the US FDA could pause the trial "if it determines the injury in the British trial was caused by the vaccine", the media outlet adds.