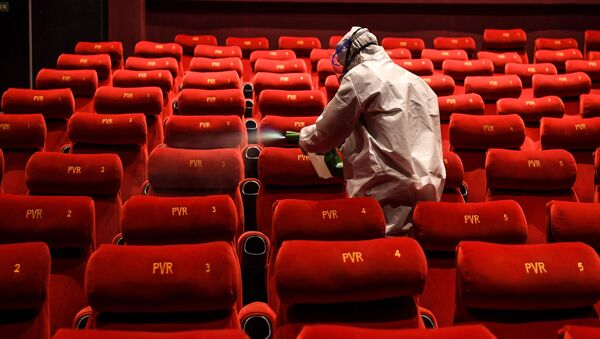 Sangeeta Yadav
All materialsWrite to the author
As cinemas across India remain shut down despite unlock phase 4, the Multiplex Association of India and Bollywood celebs have appealed to the government to allow their re-opening. Since the pan-India lockdown on 25 March, hundreds of people working in the cinemas have lost their jobs, while the movie theatres are facing financial problems.

The Producers’ Guild of India issued a statement which read, “the cinema exhibitors industry is incurring a loss of around $203 million every month due to the closure of theatres. This has led to an estimated loss of over $1.2 billion in six months of lockdown.”

There are around 10,000 cinemas across India that employ more than 200,000 people in this sector.

Appealing the same to the government to save jobs and lives, Bollywood actress Richa Chadha tweeted about a 52-year-old theatre operator, and said, “A projectionist has died by suicide due to financial reasons.”

#SaveCinemasSaveJobs and save lives! A projectionist has died by suicide due to financial reasons. This industry provides livelihood to thousands and entertainment to millions ! ❤️🙌🏽 https://t.co/MBXqs4exO1

​Actress Nimrat Kaur weighed in, tweeting: “There are millions behind the screen who make that happen. Jobs are at stake. Can’t wait for cinemas to reopen!”

Dreams come to life at movies on the big screen. There are millions behind the screen who make that happen. Jobs are at stake. Can’t wait for cinemas to reopen! #UnlockCinemaSaveJobs pic.twitter.com/kuCwHM18qa

​While the government has reopened malls, metro railways, restaurants, bars and gyms across India as part of 'unlock phase 4', cinemas throughout the nation remain shuttered.

Noting the high level of sanitation and crowd management used by cinemas, the stakeholders claimed that they are able to follow social distancing rules during the ongoing pandemic.

“With factors such as controlled and regulated entry and exit, staggered movie show timings, availability of ample waiting areas and entry of paying patrons only, will enable them to strictly adhere to the Standard Operating Procedure (SOPs),” the statement issued by the Guilds read.

The industry bodies also pointed out that international markets such as China, the UK, France, Italy, Spain, the US, and Singapore, among others, have already allowed the reopening of cinemas.

India's coronavirus tally crossed the 5 million mark on Wednesday, with 90,123 fresh cases reported in the last 24 hours, according to data released by the Ministry of Health and Family Welfare.

Many cinemagoers have also come forward to support the initiative, and appealed to the Government to reopen cinemas in October.

Its been long.. but now things are getting back to normal each and every business is almost open, but our cinemas are closed... Requesting central government to Unlock Cinemas, exhibitors will take all necessary precautions..@narendramodi @AmitShah #UnlockCinemaSaveJobs pic.twitter.com/F8QXC4OP5T

​I believe with necessary precautions just like other industries cinemas also can function. I support gradual opening of theatres. Theatres can’t sustain these kind of losses for long. We need to open theatres before the damage turns irreversible. #UnlockCinemaSaveJobs @MAofIndia pic.twitter.com/lZfjwn9ZjJ

#UnlockCinemaSaveJobs
Joy of watching stories unfold on the big screen: the clapping, laughing and tears. We miss it.
There are millions behind the screen who make that happen. Jobs are at stake.
Can’t wait to be back at the cinemas. pic.twitter.com/WN72vHUCGZ