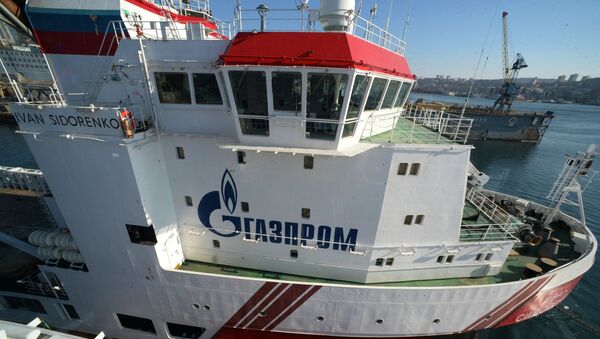 © Sputnik / Vitaly Ankov
/
Go to the photo bank
Subscribe
Ilya Tsukanov
All materialsWrite to the author
Earlier, German media reported that Berlin had offered Washington a concession worth $1.2 billion for the financing of the construction of two ports for the import of US LNG in exchange for a rejection of US sanctions against Nord Stream 2.

The Gazprom-owned Ivan Sidorenko offshore supply ship has departed from St. Petersburg, Russia and is heading toward Mukran, the German port containing pipes and other equipment used in the construction of the Nord Stream 2 pipeline, data from the Marine Traffic and MyShipTracking portals shows.

The Russian-flagged vessel is said to be traveling at about 14.5-15 knots west through the Baltic Sea, and is currently situated between Sweden and Poland. The ship is expected to arrive in Mukran on Thursday. 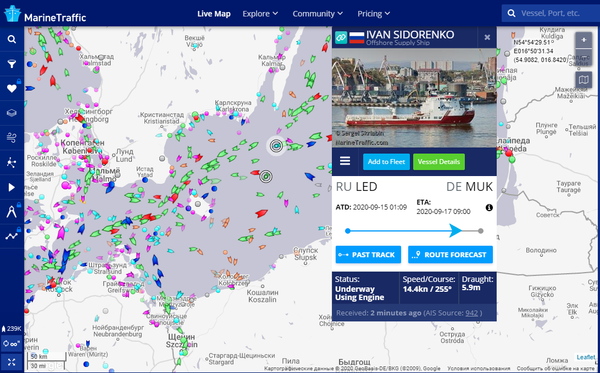 It’s not immediately clear why the vessel is making the trip. The Akademik Cherskiy pipelaying ship, which arrived in Mukran in May after traveling thousands of kilometers from the Russian Far East, remains stationed at the German port, where it has been for the past 110 days.

The future of Nord Stream 2, a 1,230 km, $10.5 billion pipeline project between Russia’s Gazprom and several Western European energy concerns, has recently been called into question in the wake of comments by German officials that Berlin may ‘freeze’ or cancel the project over the alleged poisoning of Russian opposition figure Alexei Navalny.

The Kremlin reiterated Wednesday that Nord Stream 2 is a commercial piece of infrastructure that would benefit both Russia and Europe, and urged Berlin and Brussels against ‘politicising’ the megaproject.

Also Wednesday, Die Zeit reported that Germany had offered to invest up to 1 billion euros ($1.2 billion) in terminals for the import of liquefied natural gas (LNG) from the United States in exchange for a US commitment not to apply sanctions. The proposal was reportedly sent to Washington on August 7, before the Navalny saga began.

On 1 September, Less than 24 hours before announcing the Navalny poisoning allegations, Chancellor Merkel informed US senators planning a new sanctions package against Nord Stream 2 that the project would be completed regardless of any new restrictions.

The US slapped sanctions on the Swiss contractor building Nord Stream 2 in December 2019, with just 160 km of the pipeline left to build. Russia and its European partners vowed to complete the project, which when completed, will double the existing Nord Stream network capacity of 55 billion cubic meters of gas per year, and turn Germany into a major energy hub.