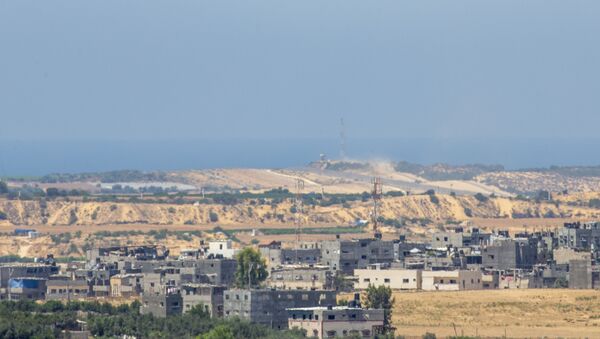 Aleksandra Serebriakova
Moscow-based Sputnik correspondent specializing in foreign affairs.
All materialsWrite to the author
Israeli Air Force hit Hamas targets in the Gaza Strip, "including a weapons & explosives manufacturing factory and a military compound", following a rocket fire towards Israel from the Palestinian enclave.

Hamas said that Israel would "pay" for "agression" against the Palestinian people after Israeli Air Force strikes against its targets in Gaza Strip on Wednesday , the group said in a statement, as quoted by AFP.

"The occupation (Israel) will pay the price for any aggression against our people or resistance sites and the response will be direct," Hamas argued. "We will increase and expand our response to the extent that the occupation persists in its aggression."

The Israeli Defense Forces announced on Wednesday that "terrorists in Gaza" had fired 15 rockets towards Israel during the night, prompting a military response from Tel Aviv. Around 10 sites belonging to Hamas, including an explosives manufacturing factory and a military training compound, were targeted in Gaza by Israeli military strikes.

"Our Air Force just struck Hamas targets in Gaza including a weapons and explosives manufacturing factory and a military compound," the IDF announced on Twitter. "We will continue to operate against any attempts to attack Israel."

It was earlier reported by Reuters that a rocket launched from Gaza had wounded two people in the Israeli city of Ashdod as rocket warning alarms were heard close to the border. No fatalities from the airstrikes were reported from either side.

The Signing of Abraham Accords

Hostilities reportedly took place just shortly after a historical peace accord was signed between Israel, the United Arab Emirates and Bahrain on Tuesday, as the two countries became the first two states in the Gulf to establish diplomatic ties with Tel Aviv. The ceremony, which took place in the United States and was attended by President Donald Trump, Israel's Prime Minister Benjamin Netanyahu, Bahrain’s Foreign Minister Abdullatif Al Zayani and his UAE counterpart Abdullah bin Zayed, marked a breakthrough in the Middle East peace process. The peace deal was negatively assessed by the Palestinian Authority leadership, who defined the act as treacherous and a betrayal of the Palestinian cause. 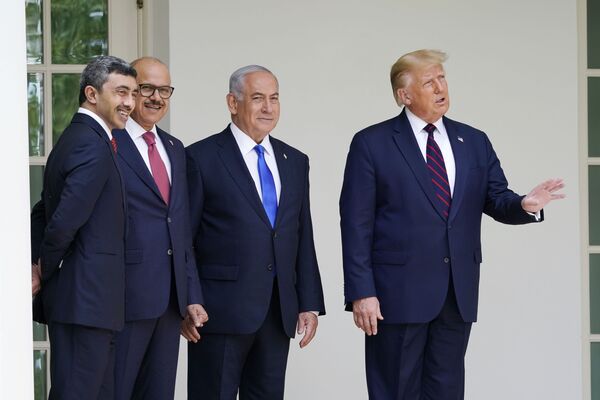 Prime Minister Netanyahu said that he was "not surprised that the Palestinian terrorists fired at Israel precisely during this historic ceremony", following his comments just shortly before his return to Israel from the United States, as quoted by Reuters.

"They want to turn back the peace. In that, they will not succeed. We will strike at all those who raise a hand to harm us, and we will reach out to all those who extend the hand of peace to us," Netanyahu said.

In August, the US president announced that the United Arab Emirates would become the third country in the Middle East, including Egypt and Jordan, would normalize relations with Israel. Later it was revealed that Bahrain would also join the peace accord, with Donald Trump suggesting that countries were "lining up that want to go into it".

The announcement was slammed by the Palestinian Authority and some states in the region, including Iranian officials, who denounced the move as a "huge mistake". The President of the PA, Mahmoud Abbas, insisted that "no peace" with Israel was possible as long as it continues its "occupation" of Palestinian lands. The representative of the UAE and Bahrain, however, insisted that the peace deal was actually set to help countries resolve the Palestinian issue, as it has effectively halted Israel's plans to extend its sovereignty in the West Bank.