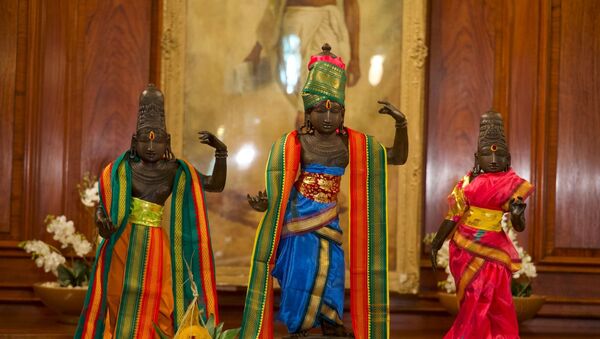 Radhika Parashar
All materialsWrite to the author
In August 2019, the High Commission of India (HCI) in London was informed that four 15th century idols of Hindu gods Rama, Sita and Laxmana were suspected to be in possession of an individual in London.

Upon investigation, the Art and Antique Unit of the London Metropolitan Police traced an art collector in possession of several idols of Hindu gods, which have been handed over to an Indian official in London and are being transferred to Tamil Nadu.

Life Size Digital Display Marks Arrival of Lord Ram, Lights-up New York's Times Square - Videos
The historically significant idols are believed to have been stolen and smuggled to the UK 40 years ago from the southern Indian state of Tamil Nadu.

The British police also revealed that the vendor originally involved in the selling of these statues is deceased; as a result, there are no plans to investigate who was responsible for smuggling them to the UK.

India’s Federal Minister of Culture and Tourism Prahlad Patel has expressed his gratitude to the London Metropolitan Police for facilitating the return of these idols to India after 40 years.

Auspicious moment as 3 more priceless statues of Vijayanagara period stolen from Vishnu temple, Nagapatinnam in 1978, recovered by @HCI_London with support of #MetPoliceLondon, restored to Govt of Tamil Nadu in presence of Hble Union Min for Culture&Tourism Shri @prahladspatel. pic.twitter.com/XRmzQIkWG6

​The priceless sculptures were reportedly stolen in 1978 from a living Vishnu Temple in Nagapatinnam, Tamil Nadu.

The news of their return to India has been received with joy by worshippers of Lord Rama, who took to Twitter to express themselves.

India to get back 15th Century Idols of Lord Ram, Mata Sita and bratha Lakshman from UK which were stolen from a temple in Tamil Nadu in 1978.

Thanks to British Police who returned Hindu God Idols stolen.

The investigation of this case was initiated by the India Pride Project – a group of art enthusiasts that uses social media to identify stolen religious artefacts from Indian temples and work towards their return.

Earlier this year, the Indian mission was successful in retrieving a statue of Lord Shiva stolen from the Ghateshwar temple, Baroli in Rajasthan years ago.