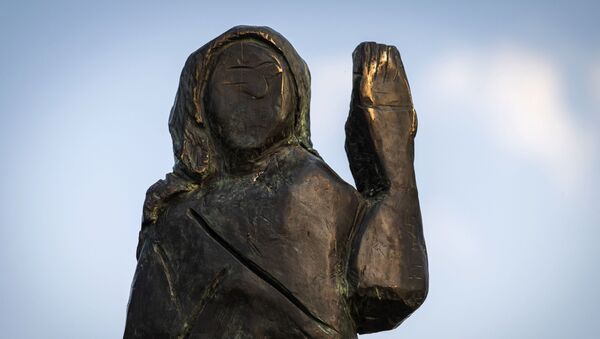 Aleksandra Serebriakova
Moscow-based Sputnik correspondent specializing in foreign affairs.
All materialsWrite to the author
A wooden statue of US first lady Melania Trump, that was constructed on the outskirts of her home town Sevnica last year, was damaged beyond repair this summer by an arsonist.

A bronze statue representing Melania Trump was unveiled in her native Slovenia on Tuesday, with the likeness set to replace its wooden predecessor that was severely damaged in the arson in July, the AFP reported.

One of the authors of the original project, Brad Downey, earlier told the German outlet Monopol that the replacement has now been designed to become “as solid as possible, out of a durable material which cannot be wantonly destroyed”. The newly sculpted figure, which he again managed in collaboration with Slovenian artist Ales Zupevc, has now returned to the same tree stump the original one once stood on until being set on fire on the 4th of July, Independence Day in the United States.

For Downey, the torching of the statue was seen as a conceptualisation of criticisms Donald Trump faces in the United States and around the world.

“This object (the burnt statue) somehow represents a visual representation of political tensions that are erupting in my country and not only in my country,” Downey told Reuters in September.

The perpetrators have not been yet identified, as Downey went on to dismiss the accusations that he was actually the one who commissioned the burning of the figure to attract more attention to his art. 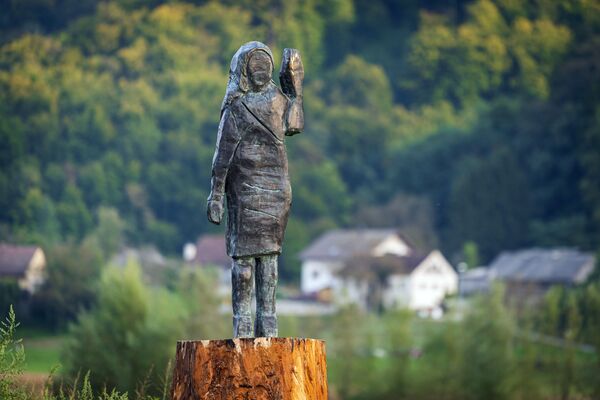 A bronze replica depicting US First Lady Melania Trump, made by US artist Brad Downey, is seen after its unveiling in a field near US First Lady's hometown Sevnica, on September 15, 2020
© AFP 2022 / JURE MAKOVEC 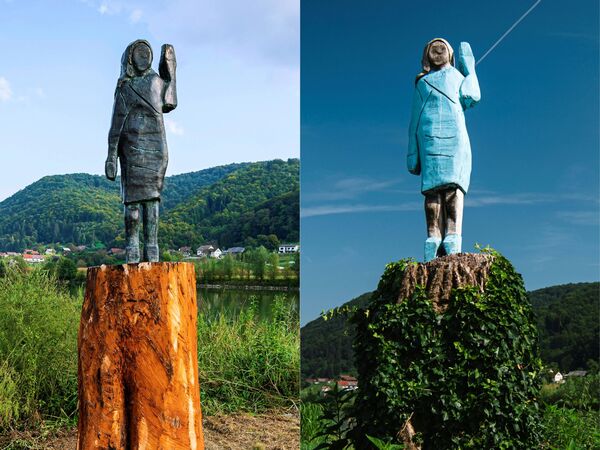 According to the photos of the replacement shared by the media, the new statue is essentially a duplicate of the original, which was erected near Melania Trump’s hometown in Slovenia last July. However, the gentle blue colour of the wooden statue, designed to remind the viewers of the blue attire FLOTUS wore to Donald Trump’s inauguration back in January 2017, was now understandably killed by the metallic undertone of the new material.

When the statue was first erected last year, it rolled many eyes and was mocked on social media by Melania Trump’s admirers and haters alike. The new version didn't escape the same fate.

She never looked better. Such detail....

Wait, was this done in 7th grade sculpting? pic.twitter.com/93KLzvcxXd

That thing looks like it came from a Walmart clearance sale.

Actually it really expresses her personality

The remains of the burnt wooden statue, once carved by Ales Zupevc, were beyond saving, according to the artists. However, they have now been put into display in local art gallery in the Slovenian city of Koper.