'Greece Was Sacrificed to Migration': The People of Lesbos Won't Allow a New Moria, Locals Say 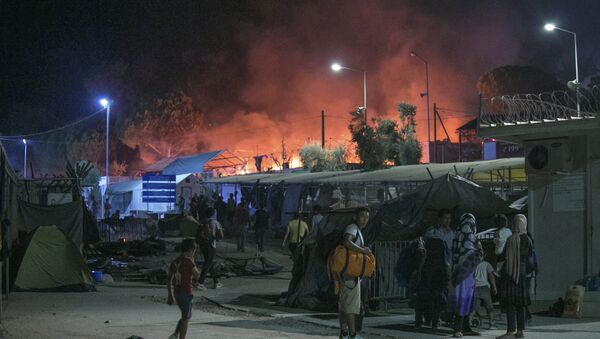 "Let them leave!" "No new structures!" "Enough!" - these are just a few of the chants by the residents of the Greek island of Lesbos, where the largest migrant camp in Europe was destroyed by a massive fire earlier this month, leaving nearly 13,000 migrants without shelter. Now, a new facility is being built on the island.

A huge fire destroyed Greece's largest migrant and refugee reception and accommodation centre, Moria, on Lesbos earlier this month. A new situation is currently unfolding on the island, which has proportionally borne the brunt of a great deal of the migration crisis.

There's a feeling on the island that can be expressed by the saying "Now or never!" The island's residents want nothing else but the final act of the drama.

At the same time, they feel that the media are one-sided in their coverage of the issue, portraying locals as xenophobes, which they believe to be unfair because it misleads everyone, not focusing on the dramatic changes that the island’s population has faced over the past five years.

Sputnik took a walk through downtown Mytilene, the capital of Lesbos.

"We're isolated on our own island"

Katerina Korfiati, the owner of a small household store, noted that "we are all victims of circumstances. Last winter they [the government] were going to build a new closed structure [to accommodate migrants] on Mount Karava, while there were already about 20,000 people in Moria. We immediately realised that they planned to build two structures on Lesbos. Eight special police units had been sent to the island because they understood that the local population's reaction would follow."

"Now we feel isolated in our own city. Incidents happen all the time. Currently, some of the residents of the village of Panagiuda (six kilometres away from the city) have to commute 40 kilometres to arrive at work in the city because of the road barriers", she said. 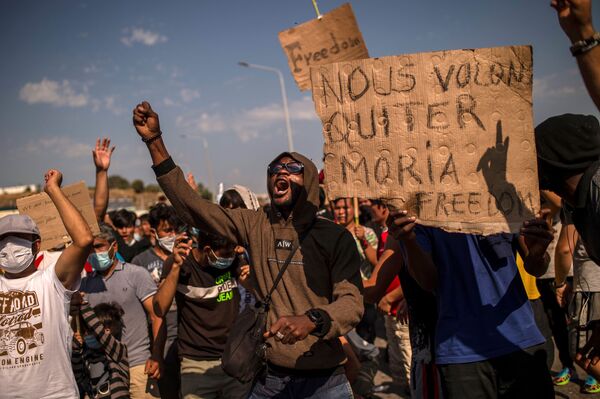 Refugees and migrants from the Moria camp protest near Mytilene on the Greek island of Lesbos, on September 12, 2020, a few days after a fire destroyed the Moria refugee camp
© AFP 2022 / ANGELOS TZORTZINIS

"We can no longer accept what others think is best for us. What the media shows is only drama: refugees and immigrants. We’re always presented as racists."

As for the future of the island, Katerina Korfiati doesn’t hide her fear of new permanent structures, open or closed, although, as she stressed that the residents are determined to prevent any attempt to lay the foundation of the new structure.

Speaking of the government’s attitude towards the issue, she believes that with the new government [the ruling New Democracy Party], the migrant flows have decreased due to  increased maritime border protection. Moreover, some migrants and refugees have been transferred to the mainland. However, there has never been a real solution to the problem.

"We are second-class citizens"

"It will be enough that there is no new centre on the island! I'm a descendant of real refugees; my great-grandfather was stabbed to death by the Turks. We know what it means to be a refugee…", Dimitris Viras, a bookshop owner from Mytilene, said. Our family owns a small plot of land in the Moria region, which my grandmother, a refugee, got working hard for her dowry to be able to get married. We don't even know if this plot of land is still there." 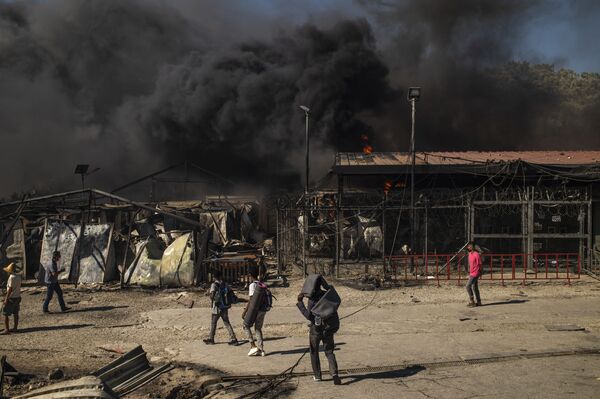 People walk past a fire raging in the camp of Moria on the island of Lesbos after a major fire broke out, on September 9, 2020.
© AFP 2022 / ANGELOS TZORTZINIS

"The people who are here now are not refugees. The refugees were those who arrived five years ago. At that time, the Greeks accepted them and offered all possible assistance, since we are a hospitable and Christian people... What has changed now, when they call us racists, and special police units come here, beating and calling the Mytilene residents names? Our living standards have dropped dramatically." 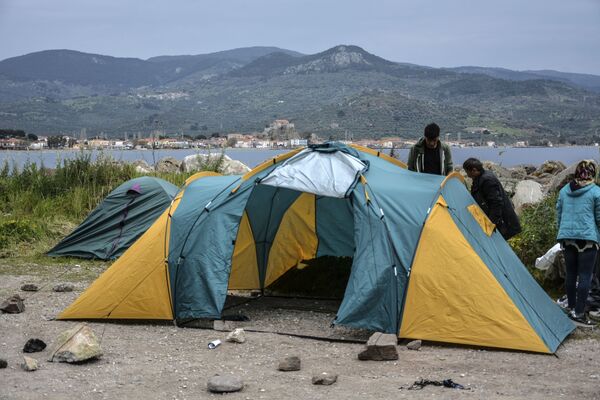 Migrants try to install a tent in the village of Petra on the northeastern Aegean island of Lesbos, Greece, Friday, 27 March 2020. Some 56 migrants who reached Lesbos in smugglers' boats from Turkey over the past few days have been quarantined in small tents in Petra for the past three days. Under public health measures adopted to hinder the spread of the new coronavirus, Greece places all people arriving from abroad in two-week quarantine. Lesbos' main migrant facility, near the village of Moria, is crammed with about 20,000 people even though it was built for 2,700.
© AP Photo / Panagiotis Balaskas

"Migrants can no longer stay here. They have destroyed our property; there are no more vegetable gardens, there's nothing left. Three days ago, 50 people set fire to the island. We are second-class citizens. Many of them have been through a lot, but not all of them. There are also many Islamists among them," he said. 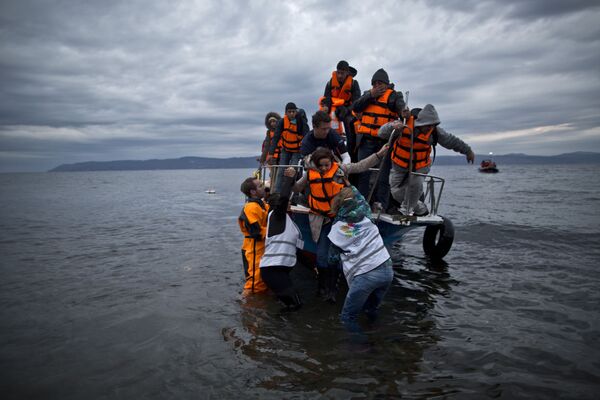 In this Thursday, Dec. 3, 2015 photo, volunteers help refugees disembark from a vessel carrying Yazidi refugee Samir Qasu, 45, from Sinjar, Iraq, and his wife Bessi, 42, their two daughters Delphine, 18, seen center left, Dunia 13, and their two sons Dilshad, 17, seen center left, and Dildar, 10, as it arrives to the northeastern Greek island of Lesbos from the Turkish coast.
© AP Photo / Muhammed Muheisen

"Whoever they are, they must leave. We should provide asylum to those who need it so that they have the opportunity to go to any European country they want."

According to Mr. Viras, over the past five years, the migrant problem, together with the economic crisis, has led to decreased trade turnover; at the same time, the pilgrim flow has decreased, which has also been an important source of income for Lesbos. All this [has happened] amid fears of neighbours. "We are … in Turkey's arms," Mr. Viras said.

He believes that it is a double parallel drama, which has reached its peak today, and the main culprits are Greek, but above all the European, politicians and their hypocrisy on the issue. Mr. Viras believes that "the island should revolt and stone the politicians. Europe is using us as it pleases. Political games are played behind our backs."

His conclusion, however, sums up the tragic irony of the situation: "My God, I tell myself, do everything possible for us and for them. The most amazing thing is that both we and they want the same thing: that they leave."

"All politicians are unwanted on the island"

The moment Sputnik started talking to brothers Sotiris and Fotis Geomilas, family jewellery-shop owners, the phone rang. It was their 85-year-old mother.

"Look, she calls us in tears, asking what’s going on," Fotis later explained.

His brother Sotiris, in turn, said that his children didn't want to return from Athens to take over the shop, although they are engaged in the same business there. They consider the island “dead”.

"The politicians have sold us. No one has come back to see what happened to us. For me, they are unwanted right now. They don’t have the courage to bang their fists on the table," he said with disappointment.

For him, as for most Lesbos residents, the current situation on the island in no way resembles the 2015 situation.

"In 2015, our task was to help people and babies fleeing war. And we did that. Then everything changed. They started desecrating our religious symbols, leaving no chapel standing; they insulted the locals, killed and stole livestock, threatened and looted. Those who support them are guided by personal motives since there is a lot of money at stake," Fotis Geomilas said. 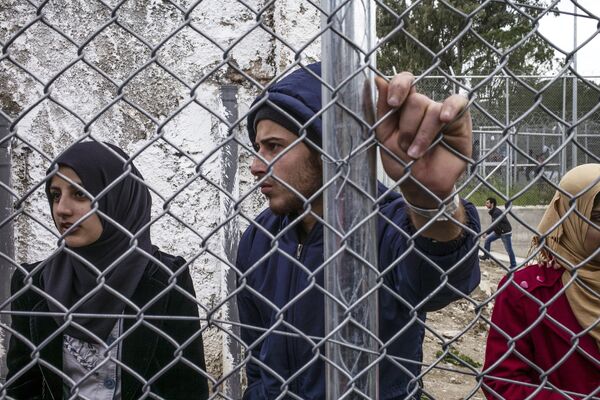 Syrian refugees stand inside the Moria camp during the demostration against the deal between EU and Turkey, on March 24, 2016 in Lesbos.
© AFP 2022 / Fabio Bucciarelli

"Currently, for every 30,000 local residents, there are 30,000 foreigners on the outskirts of the city. Has anyone here asked me how I am doing? Has anyone asked me about my job or my family? They tell us: 'Wash your hands, keep social distance due to the coronavirus', while in Moria, there are 14,000 people one on top the other, with one bottle of water for everyone, in terrible conditions."

The two brothers compare the situation to a gun ready to fire if the residents are pressured for a new structure or for an indefinitely extended stay of migrants and refugees on the island.

"The people of Lesbos won't allow a new Moria," Sotiris Geomilas said, stressing that this time the whole island would rise up in the face of the possibility of a new closed structure. This won't be just the matter of Moria or those living by Mount Karava, the whole island will be united by the same goal.