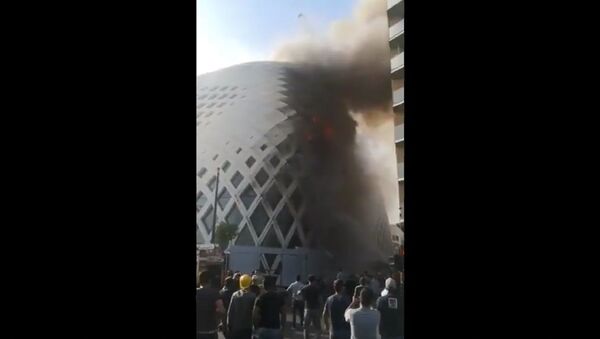 Just a few days ago, another major fire occurred in the port of Lebanon's capital, which was previously devastated by a giant blast in August that claimed lives of 190 people. August's deadly blast was caused by the detonation of several tonnes of ammonium nitrate, an explosive fertilizer, which had been stored at the port for several years.

A major fire erupted in Beirut on Tuesday, hitting the downtown commercial district. Numerous videos showing the flames and a cloud of smoke were uploaded by witnesses on social media.

According to local media reports, the fire erupted near the entrance of the Beirut International Exhibition and Leisure Center, also known as BIEL, which hosts conferences and other cultural events.

"At the moment, there are no injured people, and the fire is almost put out. We are discovering hotspots of the blaze," a member of the Lebanese civil defence told Sputnik.

​According to media, the landmark building, engulfed in flames, had been designed by the late British-Iraqi architect Zaha Hadid.