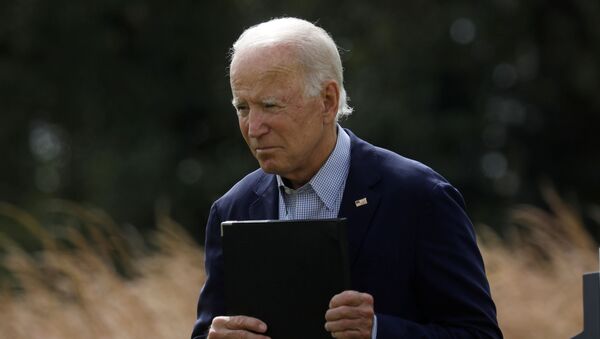 On Monday, the US president travelled to Phoenix, Arizona, where he talked to Governor Gavin Newsom concerning the climate situation and wildfires ravaging across the US West Coast.

Democratic presidential candidate Joe Biden has slammed President Donald Trump over "climate denial" and his handling of the wildfires in the United States.

Biden vowed to invest more in green policies to help the economy recover after the coronavirus pandemic.

The former vice president claimed that if the president remains in the office for another four years, they will have "more of America ablaze".

"If you give a climate arsonist four more years in the White House, why would anyone be surprised if we have more of America ablaze … when more of America is under water?", he said.

Biden's comments followed Trump's visit to Phoenix for the "Latinos for Trump" roundtable, where Governor Newsom told him that Arizona had the hottest August in the state's history and that they "obviously feel very strongly that the hots are getting hotter", and "the dries are getting drier".

"Something's happened to the plumbing of the world, and we've come from a perspective, humbly, where we submit the science and observed evidence is self-evident that climate change is real and that is exacerbating this", Newsom said.

Trump, however, suggested relying on the natural weather instead, which he claimed would soon improve the situation.

"It will start getting cooler. Just watch. I don't think science knows actually", he said.

Trump has repeatedly blamed poor forest management for the blazes covering the West Coast, including the most furious fires in California.

Back in 2018, Trump tweeted that there is no reason for deadly fires in California "except that forest management is so poor" and said that wildfires intensified due to bad environmental legislation "not allowing massive amounts of readily available water to be properly utilised".