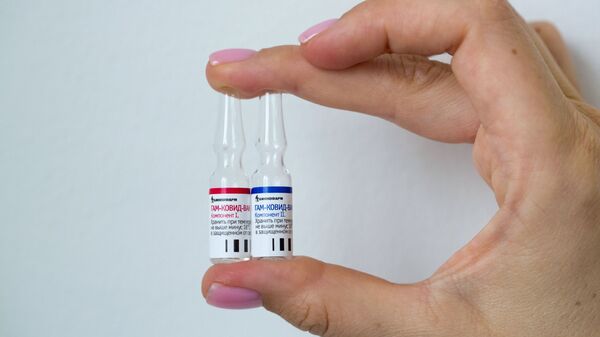 Max Gorbachev
All materialsWrite to the author
50 countries have already expressed interest in purchasing the Sputnik V vaccine, developed by Russia’s Gamaleya Research Institute. The Russian Direct Investment Fund (RDIF), the organisation that invested in the development of the inoculation, said it has received requests from over 20 countries for a total of one billion doses of the vaccine.

Russian scientists have started the third phase of clinical trials of the Sputnik V coronavirus vaccine, which has been highly praised by scientists and epidemiologists from various countries and evaluated by the renowned medical journal Lancet. According to Kirill Dmitriev, CEO of the Russian Direct Investment Fund, thousands of people have voiced their desire to participate in the trials due to the efficacy and safety of Sputnik V.

"In just two weeks, 55,000 volunteers have already been recruited in Moscow, which is even more than necessary 40,000 for the post-registration phase of the clinical trial of the Sputnik V vaccine. The high speed of recruiting is largely due to the volunteers' understanding of the safety and efficacy of the human adenoviral vectors platform, which underlies the Russian vaccine and has been repeatedly tested by experts from different countries".

"More than 250 clinical trials have been carried out and more than 75 international publications have been issued confirming the safety of vaccines and medical drugs based on human adenovirus. Experts have proven the absence of possible serious side effects of human adenoviral vectors platform, in contrast to new and yet unproven technologies of the monkey adenoviral vectors or mRNA", said Dmitriev.

Russia became the first country to register a vaccine against the coronavirus, which has infected more than 29 million people around the world and killed almost one million. According Industry and Trade Minister Denis Manturov, Russia may start exporting the vaccine already next spring.