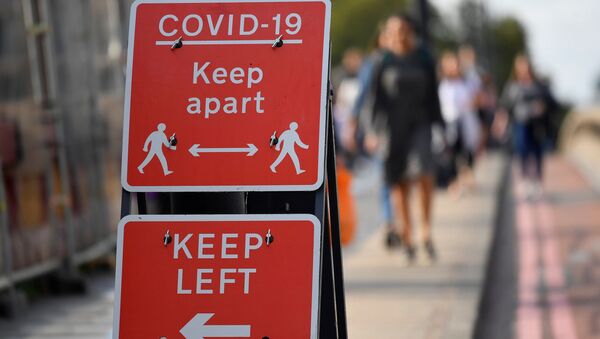 © REUTERS / Toby Melville
Subscribe
Max Gorbachev
All materialsWrite to the author
The development comes as countries in Europe, including Britain, are seeing a sharp increase in coronavirus cases. 3,300 new infections were recorded in the United Kingdom on 13 September and five people died from the disease. This was the third consecutive day in the UK with more than 3,000 new cases.

Britain’s Home Secretary Priti Patel has called on the public to observe the "rule of six", a new safety measure introduced to curb the spread of the coronavirus, or risk paying fines.

"These new rules are easier to understand and easier for the police to enforce. I know that, as part of our national effort, the law-abiding majority will stick to these new rules. But there will be a small minority who do not, and the police have the necessary powers to take action against them. This disease is deadly and that is why it is right that the police enforce where people break the rules", said Priti Patel.

Previously, authorities said that people who ignore the new rules will be fined 100 pounds ($128) and those who break them again will pay double the amount, with the maximum fine reaching 3,200 pounds ($4,110). Marshals have started patrolling the streets after the rule came into force.

According to Home Office officials, those who refuse to accept the 100 pound fine will be arrested and taken to court. Moreover, those who repeatedly break the rules may face a criminal record, The Sun reported, citing an anonymous source.

What are the new COVID rules?

Gatherings of more than six people are no longer allowed in England, Scotland, and Wales. The rule applies both indoors and outdoors in England and Scotland, and indoors in Wales as well as in public places such as at pubs, cafes, and restaurants.

UK Police Expect 'Last Days of Rome' Weekend as Brits to Party Hard Ahead of New COVID 'Rule of Six'
Crime Minister Kit Malthouse said people should inform authorities if they see violators or report neighbours they suspect of hosting a gathering of seven or more people. Pubs and restaurants face fines of 1,000 pounds ($1,200) if they don’t take the contact details (name and phone number) of their clients. The measure is necessary to inform clients if a potential outbreak has been linked to the venue.

The new safety rules were introduced in response to a rise in infections. The coronavirus’ R rate (the number of people an infected person will pass the disease on to) in Britain has jumped to between 1 and 1.2 for the first time since March. 3,300 new infections were reported on Sunday and five people died from the disease.

However, the new rules have been criticised both by scientists and politicians. Sir Graham Brady, chair of the 1922 Committee, told Times Radio:

"It’s peak infringement of people’s liberties and their right to a normal family life. You could mitigate quite considerably by excluding younger children, the people we know who are least likely to be affected by the virus, less likely to spread the virus".

Scientists at Oxford have called the measure "catastrophic" and said it may tip the Brits over the edge, noting that there is no evidence to support the notion that it would help.

However, government scientific adviser Peter Openshaw has warned that the current rise in infections will "inevitably" result in more hospitalisations and deaths. Britain has the fifth highest death toll from the coronavirus – 41,628. Openshaw stressed that if the public doesn’t get a grip, it will risk returning to a "hard lockdown".

000000
Popular comments
Adolf would be so proud of Boris and cronies. Since when did the UK swap democratic laws in preference of a fascist dictatorship?
anne00marie
14 September 2020, 17:00 GMT1
000000
EuroPox, wasn't it Tony Blair who gave us Supreme Court's, to keep his wife in work? Just cannot get my h as around how we b came a fascist state, controlled by eugenic enthusiasts.
anne00marie
14 September 2020, 17:02 GMT1
000000
Newsfeed
0
New firstOld first
loader
LIVE
Заголовок открываемого материала
Access to the chat has been blocked for violating the rules . You will be able to participate again through:∞. If you do not agree with the blocking, please use the feedback form
The discussion is closed. You can participate in the discussion within 24 hours after the publication of the article.
To participate in the discussion
log in or register
loader
Chats
Заголовок открываемого материала
Worldwide
InternationalEnglishEnglishMundoEspañolSpanish
Europe
DeutschlandDeutschGermanFranceFrançaisFrenchΕλλάδαΕλληνικάGreekItaliaItalianoItalianČeská republikaČeštinaCzechPolskaPolskiPolishСрбиjаСрпскиSerbianLatvijaLatviešuLatvianLietuvaLietuviųLithuanianMoldovaMoldoveneascăMoldavianБеларусьБеларускiBelarusian
Transcaucasia
ԱրմենիաՀայերենArmenianАҧсныАҧсышәалаAbkhazХуссар ИрыстонИронауОssetianსაქართველოქართულიGeorgianAzərbaycanАzərbaycancaAzerbaijani
Middle East
Sputnik عربيArabicArabicTürkiyeTürkçeTurkishSputnik ایرانPersianPersianSputnik افغانستانDariDari
Central Asia
ҚазақстанҚазақ тіліKazakhКыргызстанКыргызчаKyrgyzOʻzbekistonЎзбекчаUzbekТоҷикистонТоҷикӣTajik
East & Southeast Asia
Việt NamTiếng ViệtVietnamese日本日本語Japanese俄罗斯卫星通讯社中文（简体）Chinese (simplified)俄罗斯卫星通讯社中文（繁体）Chinese (traditional)
South America
BrasilPortuguêsPortuguese
NewsfeedBreaking
04:00 GMTNewsom: California to Nix the Word 'Alien' From State Laws on Immigration
03:45 GMTMexican Soldiers Detained by Border Patrol Near Puente Libre - Authorities
03:35 GMTUN Secretary General Holds Talks With Foreign Ministers of Armenia, Azerbaijan
03:25 GMT'Country Has Gone to Hell': Trump Urges US Voters to Back 'America First' GOP Ahead of 2024 Election
03:18 GMTRussia Has ‘Thoughtful Optimism’ on Possibility of Restoring Iran Nuclear Deal - Lavrov
03:01 GMTMcConnell Refuses to Rule Out GOP Blockade of a Biden SCOTUS Nominee
00:38 GMTVideo: Amtrak Cross-Country Train Derails in Montana, Leaves Dozens Injured & At Least 3 Dead
00:00 GMTGerman Voters Going to Polls in Election That Marks End of Merkel's 16 Years as Chancellor
YesterdayVenezuelan Government Delegation Arrives in Mexico For Talks With Opposition - Maduro
YesterdayLavrov Says Borrell Told Russia to Get Out of Africa
YesterdayFour Teens Charged With Plotting School Attack on 25th Anniversary of Columbine Shooting
YesterdayMagnitude 5.0 Earthquake Rocks Taiwan - EMSC
YesterdayGermany Election: Merkel Warns Country's ‘Future’ at Stake Over Possible Left Swing
YesterdayAnthony Joshua Suffers Shock Loss to Oleksandr Usyk as Big Time Boxing Returns to UK After Pandemic
Yesterday'Things Happen': Trump Says 'Bad Call' From Doctor Would Possibly Prevent 2024 Election Run
YesterdayNorth Korea Ready for Talks With South on Ending 71-Year State of War
YesterdayTexas Democrat Not Ridin' With Biden on 'Trump'-Style Deportations to Haiti
YesterdayFrench Capital Sees 11th Weekend of Protests Against COVID-19 Passes
YesterdayLancet Task Force Probing COVID Origins Disbanded 'in Favour of Wider Biosafety Research'
YesterdayKamala Harris Hires Jen Psaki’s Brother-in-Law as Her Ratings Hit Bottom Amid Border Crisis