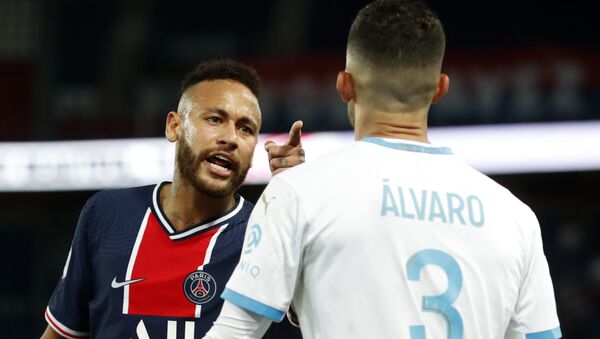 © REUTERS / GONZALO FUENTES
Subscribe
Advitya Bahl
All materialsWrite to the author
Last season’s Ligue 1 champions, Paris Saint Germain, took on Marseille in their second game of the new season after losing their opening game. Despite having Neymar and Angel Di Maria back in the playing XI, a close-ranged volley from Florian Thauvin saw Marseille earn their first victory over the defending champions since 2011.

The world's most expensive player Neymar has accused Marseille's Alvaro Gonzalez of calling him a "monkey Motherf*****" after Paris Saint Germain’s (PSG) home defeat to Marseille in France Ligue 1 on Sunday.

Neymar took to Twitter after the game and wrote “VAR catching my aggression is easy… now I want to see the image of the racist calling me ‘Mono Hijo De Puta’ (monkey motherf*****)..  that I want to see!”

In another tweet Neymar called Alvaro an ‘a*****e' and said that the only thing he regretted was not hitting the Marseille player in the face.

The Brazilian icon was among the five players who were sent off as the tense game between the two sides descended into chaos late into the stoppage time as the players exchange kicks and punches. Referee Jerome Brisard was forced to send off PSG’s Leandro Paredes and Layvin Kurzawa as well as Marseille’s Jordan Amavi and Dario Benedetto.

Neymar was given a straight red card after the referee had a video replay check in which the Brazilian was seen hitting the Marseille defender on the back of the head. While heading towards the tunnel, the PSG star told officials that he was racially abused.

However, the Marseille defender Alvaro Gonzalez was quick to react to Neymar’s claim and defended himself by stating “there is no room for racism”.

“Sometimes you have to learn to lose and take it on the field,” Alvaro wrote on Twitter while posting a picture with his teammates.

The match between PSG and Marseille was no less than a bad-tempered game as it offered a lot of poor challenges, fights, allegations of racism and even claims that a PSG player spat on his opponent. The referee showed as many as 14 yellow cards and five red cards during the game.