Hotel Rwanda Hero Appears in Court on Terrorism Charges but Was He 'Kidnapped' With Help of UAE? 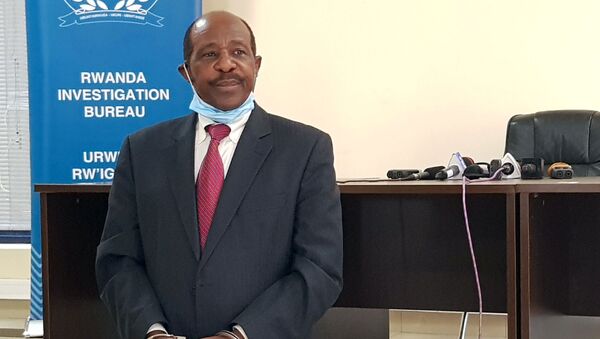 © REUTERS / CLEMENT UWIRINGIYIMANA
Subscribe
Chris Summers
All materialsWrite to the author
In April 1994 a plane carrying Rwanda's President Juvenal Habyarimana - from the Hutu tribe - was shot down by a missile near the capital, Kigali. Hutu militants used it as an excuse to launch a genocide against the Tutsi minority, killing around 800,000 people.

Paul Rusesabagina - whose heroic stand against Hutu militants during the 1994 Rwanda genocide was made into a Hollywood film - appeared in court in Kigali on Monday, 14 September, accused of terrorist charges.

​While living in the United States Rusesabagina co-founded and supported the opposition Rwandan Movement for Democratic Change (MRCD) but the government of President Kagame has accused him of supporting the National Liberation Front (FLN), an armed group which it claims is the military wing of the MRCD.

He is also accused of backing RUD-Uranana, an armed group which launched an attack across the border from the Democratic Republic of Congo in 2018.

​But Rusesabagina’s lawyers David Rugaza and Emeline Nyembo have argued the court has no jurisdiction to try him because he is a Belgian national and was not extradited according to international law.

Rusesabagina arrived in Rwanda from the United Arab Emirates but his supporters say he was kidnapped with the connivance of the authorities there.

A UAE government official told CNN he had been sent to Rwanda legally but admitted there was no agreement between the Gulf state and Rwanda to extradite alleged criminals.

​Grace Ndikumagenge, a Rwandan who went into exile three years ago, told Sputnik: "I believe he was kidnapped. Kagame’s rapprochement with UAE officials led to the kidnapping of Rusesbagina in collaboration with Kagame's spies working in the UAE."

"One thing you need to know about Kagame is that he is selfish so that he feels no Rwandan should be known more than him. For Kagame, Rwanda and Rwandans are in his hands. He thinks that he can kill any Rwandan he doesn’t want."

​Ms Ndikumagenge, who is in exile in another African country, said: “Rusesabagina is a hero who is more famous for rescuing people than Kagame. So Kagame doesn’t like that. He has set many traps for him so that he can see how to silence the nations and foreigners who treat Rusesabagina as a hero.”

The Rwandan government says Rusesabagina - who allegedly called for armed resistance to Kagame in a YouTube video - was arrested on an international warrant but his family say he was actually abducted from Dubai, without any formal extradition process. 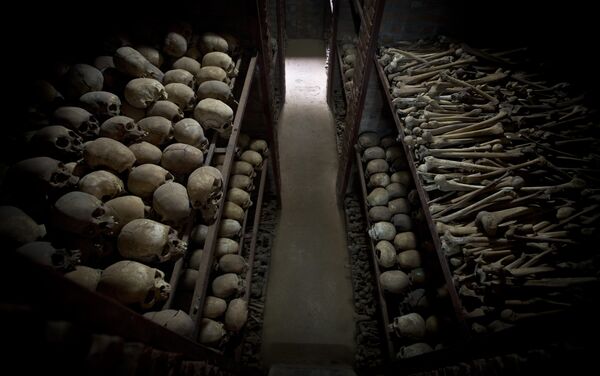 The skulls and bones of some of those who were slaughtered as they sought refuge inside the church, are laid out on shelves in an underground vault as a memorial to the thousands who were killed in and around the Catholic church during the 1994 genocide in Nyamata, Rwanda, Friday, April 4, 2014
© AP Photo / Ben Curtis

Rusesabagina, a Hutu, was portrayed by Don Cheadle in the Oscar-nominated film Hotel Rwanda. It tells how he shielded hundreds of terrified Tutsis in the Hotel des Mille Collines and used his connections with the Hutu Power leaders to protect them.

After the genocide the Hutu Power elite fled and the Rwanda Patriotic Front (RPF) rebels - who were almost entirely Tutsi - took Kigali.

Kagame has been lauded by western governments for returning peace to Rwanda and boosting economic growth but his critics say democracy is a sham - Kagame won 98.79 percent of the votes in the 2017 presidential election - and the RPF cracks down mercilessly on political opposition.

Ms Ndikumagenge said: “Human Rights Watch is trying to speak for Rwandans by pointing out that their rights are being violated but Kagame is also using his power to silence HRW reports.”

Ms Ndikumagenge said: "Kagame’s government belongs to the Tutsi but does not belong to all Tutsis. Instead it belongs to a small Tutsi gang and their families living in Uganda and a small percentage of Hutu who accept the line of Kagame, but they don’t have power in the leadership. They are Kagame's tools." 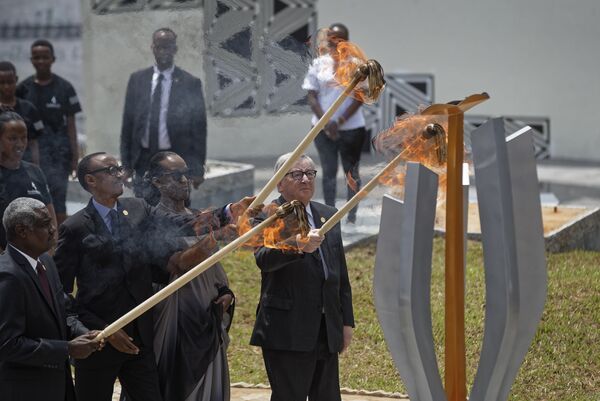 She said: "It doesn’t matter to Kagame if you are Hutu or Tutsi, if you don’t accept the dictatorship of his special cell you deserve death."

Several Rwandan dissidents in exile have been killed - including Rwanda's former chief of external intelligence, Colonel Patrick Karegeya, who was murdered in Johannesburg on New Year's Eve 2013.

Ms Ndikumagenge said Kagame had used the shame of the genocide to silence many Hutus in Rwanda and she also criticised English Premier League club Arsenal for wearing Visit Rwanda badges on their shirts.

​"It is not good to advertise a dictator, a killer like Kagame,” she said.

Earlier this year the Prime Minister of the United Arab Emirates and ruler of Dubai, Sheikh Rashid bin Mohammed al-Maktoum, was the first official guest at a luxury eco-lodge in northern Rwanda, which had been officially opened by President Kagame.

The sheikh visited the Volcanoes National Park and witnessed mountain gorillas at close quarters on a trip with Mohammed al-Shaibani, the CEO of the Investment Corporation of Dubai and Chairman of Kerzner International, which owns two luxury hotels in Rwanda.

000000
Popular comments
kagame is a murderous criminal whom the west and especially the u.s. props up to rob the d.r.c. of its natural wealth belonging to the peoples,as the article stated hutu&tutsi masses have paid with their lives for the criminal occidental blood lust for other nations resources,all aided and abetted by tutsi&hutu comprador elements