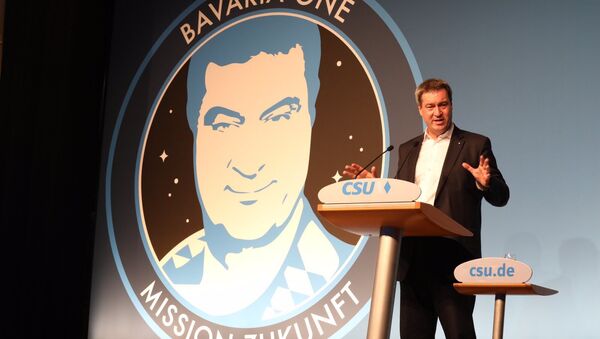 © Photo : Markus Söder/twitter
Subscribe
Max Gorbachev
All materialsWrite to the author
Almost 13,000 people have been sleeping rough after a migrant camp on the Greek island of Lesbos was destroyed in a fire. The incident has reignited the debate on how to deal with the refugee crisis, which has plagued the European Union since 2015.

Markus Söder, leader of the Christian Social Union (CSU) party, said Germany could take in more migrants from Greece’s burnt Moria refugee camp. Söder, who also serves as minister president of Bavaria, said the country should "substantially increase" the share of migrants it can accept without elaborating on the exact number.

This week, Germany and France agreed to accept between 100 and 150 unaccompanied minors from the Moria camp. Berlin also brokered a deal with 10 European countries that will also accept migrant children. In all, EU countries will accept 400 people. After the move was announced, a group of charities and organisations wrote an open letter to the German government calling on the authorities to do more to address the plight of refugees in Greece.

"The shameful situation in the camp and the fire disaster are the direct result of a failed European refugee policy - now the EU must finally help the people affected", the letter reads.

However, there were those who voiced opposition to accepting any migrants in the first place. Beatrix von Storch, deputy leader of the right-wing AfD party, said that accepting people from the camp would send a wrong signal. "We have to send a very strong signal that the abuse of political asylum is not accepted. If they burn down the refugee camp, they will have to stay", von Storch said, referring to the fact that the fire that destroyed the Moria camp on 9 September was started by residents who were angered by the quarantine measures imposed to contain the outbreak of the coronavirus.

New Migrant Camp Being Set Up on Lesbos, Greece After Major Fire - Video

The incident at the Moria camp has reignited the debate on how the European Union should deal with the refugee crisis, which has plagued the bloc since 2015. While many refugees have arrived from war-torn countries liked Syria, Afghanistan, and Iraq, others have come from poverty-stricken countries like Somalia. The main problem resulted from the Dublin Regulation, an EU law that says a migrant must apply for asylum in the country where they first entered the EU.

This means that Greece and Italy, the main points of entry for migrants, would have been the ones to offer asylum to the migrants. Athens and Rome have long accused wealthier northern EU states of failing to help them deal with the problem. The European Union signed an agreement on relocating the migrants across the bloc, but Eastern European nations have been reluctant to accept refugees.

000000
Popular comments
I wonder why the Germans come up with this proposition now. All those engineers, scientists and graduates waiting in Greece while in Germany there is a shortage of a high educated personnel and they have to beg the Russians for a cheap gas. LOL